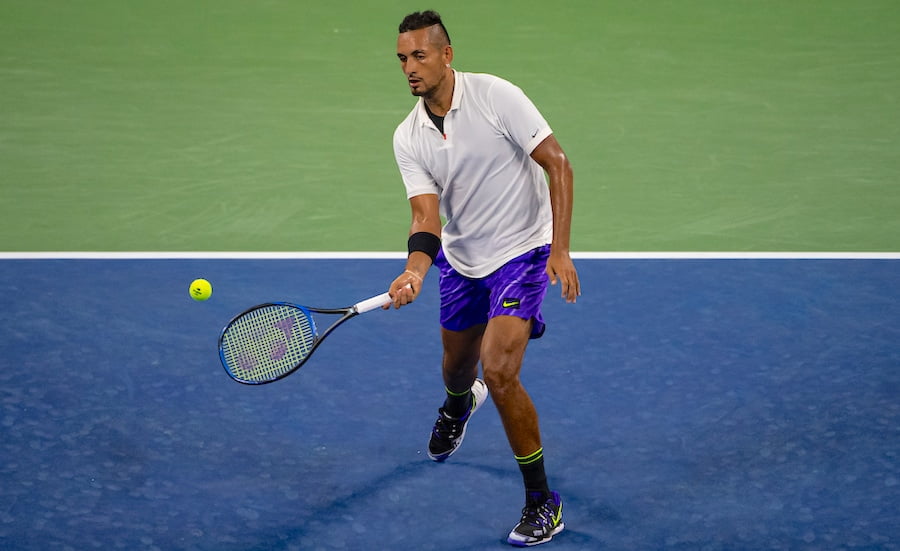 Is an underarm serve really that effective for Nick Kyrgios? Maths professor finally reveals the truth

The underarm serve has been at the forefront of one of the biggest tennis debates of the year, but do they really work better than an overarm serve for players like Nick Kyrgios and Alexander Bublik? We asked eminent maths professor & expert in tennis data analytics Dr Leonidas Spiliopoulos to conduct the research

Right now, discussion tends to centre around whether an underarm serve violates the sportsmanship of the game and is disrespectful to the opponent, particularly if there is no pressing medical reason due to injury to do so, e.g., Chang’s famous underarm serve in the 1989 French Open final against Lendl. Underarm serves have been used sporadically in the past, but are making a comeback primarily due to Nick Kyrgios and Alexander Bublik. While the debate about the sportsmanship of using the underarm serve rages on, and will likely never be resolved, this has drawn attention away from the question of whether the underarm serve, is itself, an effective weapon or not.

Is the reason why it has not been used often in the past because players felt ethically bound (or were afraid of fan reactions) or because it is simply not an effective serve to use in professional tournaments? While we can make numerous arguments about whether underarm serves are effective or not, ultimately to resolve this we need to turn to analytics. Let’s compare first serve statistics for overhead serves (OS) and underarm serves (US) to see how they fare—see the graph below. Since there is significantly less data on US, these are the best estimates currently available but we should expect that the true percentages may be somewhat higher or lower than the ones reported below.

Unsurprisingly, in terms of 1st Serve %, underarm serves are more likely to land in (81%) than overhead serves (61%). Hence, US are less risky than OS in terms of serving a fault. On the other hand, assuming the US is in, it may be considered riskier because if not executed properly then a receiver can easily put away the point. This is currently not the case, as the 1st Serve Won % is also higher for the underarm serve (83%) than the overhead serve (71%). Finally, let’s look at the Ace % for both types of serves. Again, the underarm serve (34%) outperforms the overhead serve (8%), as receivers are so far back that they don’t get to the ball in time.

In terms of all 1st serve statistics, the underarm serve seems to be more effective than an overhead serve. What does game theory have to tell us about the optimal use of the underarm serves? Ultimately, the more useful statistic is the % of (service) Points Won as it also includes the effect of the reduction in second serves due to the small probability of a fault with the US. Ideally, if receivers were correctly anticipating the underarm serves (Thiem claims to be have done so when playing against Bublik), the Points Won % when the first serve was an US or OS should be the same. This is currently not the case, as active mens’ average Points Won % for an underarm serve is 81% whereas for the overhead it is only 63%. The Points Won % for the US is higher than that of even the most effective OS servers (between 67% and 70% for Federer, Nadal, Djokovic and Kyrgios). The implication of this difference is that the underarm serve is still relatively underutilized and should be used more often than it currently is.

In fact, the players that are more likely to benefit from the underarm serve, are those whose overhead serve is effective. This is because a fast and well-placed OS requires the receiver to hang back deep in the court, as Nadal does. Consequently, it is harder for the receiver to reach a well-placed, short underarm serve before the second bounce (hence, the high Ace % we found above). If receivers start anticipating underarm serves, then the Points Won % for US will start to fall below the 81% we currently find. However, as the receiver starts standing less far back for better US positioning, the Points Won % for the OS will increase (from the 63 % we found) as the receiver is forced to a suboptimal position for an OS. As receivers adjust, we expect the Points Won % of the OS to keep rising and of the US to keep falling, until they are equal. However, at this new optimum, the Points Won % (combining both US and OS) will be higher than that prior to the use of underarm serves. Consequently, players adding the US to their repertoire can improve their serve effectiveness by introducing further unpredictability in their first serves.

There are additional benefits to the underarm serve that are not captured in the above analysis:

Finally, perhaps with the exception of Kyrgios, players have not added underarm serves to their training. Therefore, if players were properly coached in its application and practised it, there could still be room for improvement in their execution, which means that the statistics calculated above would underestimate the strategic benefits of the US.

How often should players ideally use underarm serves? The above results suggest that for some players it could be used more often than it currently is. Game theory can provide the solution for the optimal percentage of underarm and overhead serves that a player should use; however, this would require a detailed analysis of the individual serving and receiving characteristics for both players and significantly more US data than currently available. Based on the data at hand, it is advisable for players to further consider the usefulness of the underarm serve to increase the unpredictability of their first serves. Since the US data from actual matches is limited, the final decision must be based on more data and statistics collected from training sessions combined with careful testing of the strategy in future matches.