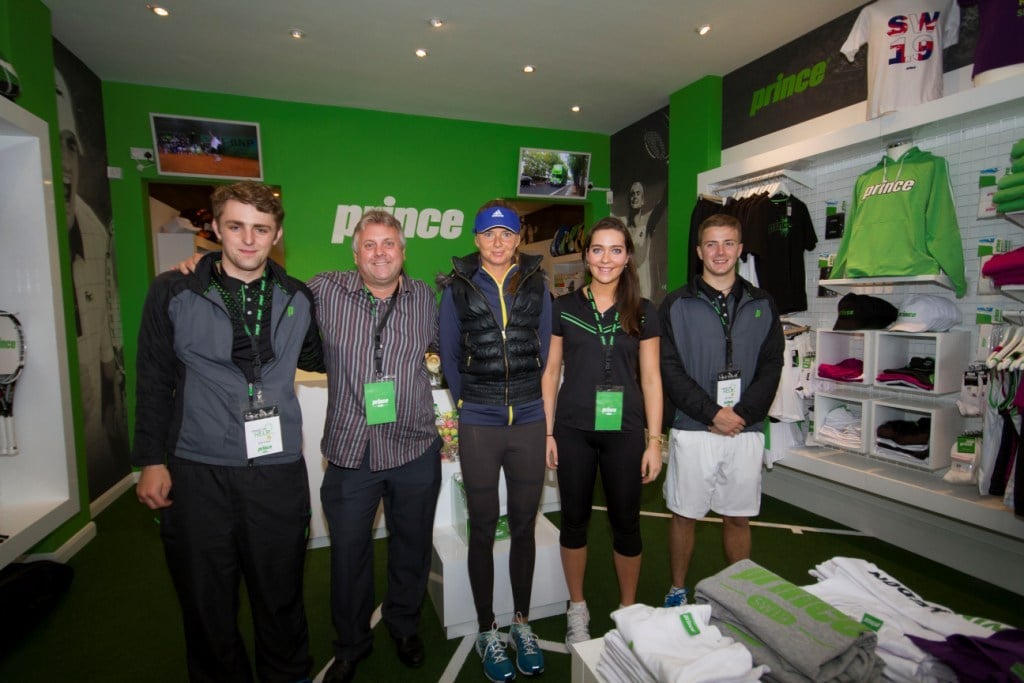 Callan, manager of Prince’s new flagship store in Wimbledon village, talks about the recent release of their ESP range.

What is the philosophy behind Prince’s new Extreme String Pattern range?

The game has changed over the years, going from much flatter hitting to spin generation. Players are naturally trying to produce spin with their swing patterns, the strokes they produce with semi-western grips, and the game they play. Manufacturers have looked at technology that can enhance a spin player’s game.

These tremendous effects that we have found through the Extreme String Pattern rackets, which have very open patterns – something like 16 strings in the mains, 16 crosses. They provide a double-edged effect. When you put in a pattern like that on a frame you get terrific string movement across the face of the string bed, and a snap-back effect as well from the string.

So ESP is a reaction to the importance of spin in today’s game. How exactly does the technology, which essentially involves reducing the number of strings in the stringbed, achieve this?

If you put one of these rackets under a high-speed camera and film the hit point with the ball you’ll actually see the string move to one side and snap back as it releases the ball, as the stroke is played.

You also get terrific racket head speed, certainly with our technology, because we have the holes in the side of the frame. Not only do they help the string move, to increase the size of the sweet spot, but the aerodynamics also make the racket quicker through the air.

The Warrior 100 ESP has 14 mains and 16 crosses. Typically a more traditional string pattern is something like 16 mains and 19 crosses or even denser at 18 by 20. The new open-pattern rackets, where the squares of the stringbed appear larger, help produce spin because the strings can grip the ball when hitting through it, low-to-high with topspin. More of the ball gets pressed into the stringbed and the player feels like they can ‘rip’ the ball more.

Then you link it with Prince’s O Technology – you get more string movement which multiplies that effect again. Then you add some of the new string technologies, these new polyester strings that are very low-friction and can slide over one another, and you get a tremendous effect.

We’ve seen players producing up to 30% more spin. We play-tested them extensively – we had some of our top juniors playing with them – and you could physically see the flight of the ball change, the increased looping of the drives.

And it is the young players who naturally want to play with spin. Most have never seen players from previous generations, so it is very difficult for them to associate their games with the McEnroe-Connors era, when those heavier rackets didn’t allow the player to use the techniques that they use now. To them it’s a natural progression – you can pull off shots that weren’t available 10, 20, 30 years ago. That’s why you get the likes of Rafael Nadal ripping incredible topspin winners from the baseline, because as a player he can generate terrific revolutions on the ball – more so than any other player, I believe.

The average mortal is probably not going to manage that, but the technology can enhance that to produce that same effect.

Just as the advent of graphite rackets changed the face of tennis in the 1980s, advances in string technology – particularly polyesters – have been the driving force behind this evolution.

If you used a conventional string in these rackets – something like a gut string, which was very prevalent in the game 20 years ago – they wouldn’t last too long. They just wouldn’t have the durability to deal with the constant movement.  Polyesters came in and proved very popular – there are probably more polyesters being sold now than any other type of string.

At Prince we’ve created a range of strings specifically for these rackets. It’s not just about buying the racket, it’s about buying into the string technology as well – it comes as a package. Putting the two together gives you the maximum effect.

Each racket comes with a specific recommended string – quite heavy-gauge polyester strings. You’ve got to be a little bit intuitive with the tensions you can get away with, but that’s when you should be going to see a qualified technician that can give you the guidance and top rate servicing job.

They can now shape the cross-sections of polyesters. You might get a hexagonal string, and octagonal string – even a pyramid string, which will actually produce more spin than any other shape out there, because it has a leading edge that cuts into the ball.

It’s the combination of string technology and racket technology that produces maximum effects. The game is not going to go backwards, it’s only going to go one way. The importance of spin generation, with the modern stroke techniques and the way the players approach the game, will only increase over the coming years.

Are there any other trends that people have to buy into to get the most out of spin-friendly frames?

Players are using a smaller grip now. At one stage in the game it went completely the other way – I remember in the 1980s players were looking for fat, rounded grips – but it’s now completely the opposite. The feedback I get from players and customers is that they can shape the head better into the ball – they feel they can manoeuvre the head of the racket around the ball more easily with the smaller grip, creating a little more topspin and even sidespin.

Polyesters have an enduring reputation as tough strings to live with, offering little feel and often linked to issues in elbows and shoulders. While they are improving rapidly, is there anything that can be done to protect the arm and provide that extra feel?

Hybrid stringing is very good. A lot of pros use hybrid strings – typically with the more durable polyester on the mains and the softer multifilament on the crosses. Roger Federer does it in reverse with a natural gut in the mains, but then he can probably afford to waste as many main strings as he likes!

I highly recommend it, and I also recommend that younger players should probably not be using polyesters at all. You want them to fully develop and have the strength in their arm and shoulder first, then when they get to a certain age it’s absolutely fine to cross over to polyester.

Polyesters are a lot more sophisticated than they were, so you can find co-polyesters that are softer. All polyesters used to be one-piece monofilaments, which was quite stiff, and the feedback that the string would have given the players wouldn’t have been as intuitive as it is these days. You can get some good advanced polyesters.

What you must watch is the tension of a polyester string. Of all the materials used for stringing it has a tendency to let its tension drop out more quickly than a multifilament string, for example. You’ve got to be a little bit more savvy and a little bit more disciplined as to how often you’re prepared to string your racket. If you go to a good technician they should be able to take a read of the tension as they’ve strung the racket – they can get a dynamic tension, or DT, read – the actual tension that has been achieved in the racket.

Typically, when that drops by 25-30%, that’s the time to put in for a restring. What we offer here is a service where anybody can come in and have their racket tension checked for free. When we string the racket we always give that DT reading, so if the customer feels his game has changed a bit, or he can’t spot the ball as he’d like, or he can’t get the response he wants from the racket, he can check the DT and he can get a restring if necessary.

For more on Prince’s new ESP range and the rise of topspin tennis, pick up the January issue of tennishead – in stores from December 12.