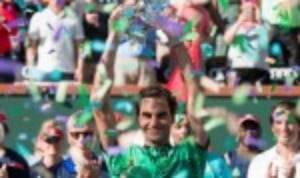 The world No.1 has landed in a relatively soft section of the draw and he is likely to come through the early stages unscathed. He is projected to encounter Fabio Fognini in the fourth round, Dominic Thiem in the last eight and Grigor Dimitrov in the semi-finals.

Federer cannot encounter Novak Djokovic until the final. The Serbian, making his latest comeback from a right elbow problem, has been handed a daunting route to the championship match.

A qualifier will provide Djokovic with his first challenge but Kei Nishikori is a likely third round opponent. If the Serbian overcomes the Japanese, Juan Martin del Potro is expected to waiting in the last sixteen.

Marin Cilic, the No.2 seed, is a probable quarter-final rival and Alexander Zverev could be a last four opponent.

Dimitrov, in the same quarter as Kevin Anderson, will start against Fernando Verdasco or Guido Pella. Andrey Rublev, who the Bulgarian defeated at the Australian Open, is a possible last 32 rival.

Kyle Edmund has not been seen since his heroics in Melbourne in January, however he is fit and raring to go at the Tennis Garden. He has been handed a first round bye and awaits the winner of the Denis Istomin-Peter Gojowczyk contest.

Few players enjoy the conditions in the California desert more than John Isner. The big-serving American has had an unspectacular start to the season, but he relishes this period on the calendar.

The 2012 finalist has been given a first round bye and will meet either Gael Monfils or Matthew Ebden in the second round.

In the standout first round ties, Borna Coric will start against Donald Young, Taylor Fritz will take on his close friend Reilly Opelka and Steve Johnson and Daniil Medvedev will battle it out to earn a shot at Nick Kyrgios.

The action begins on Thursday, and the full draw is available here.