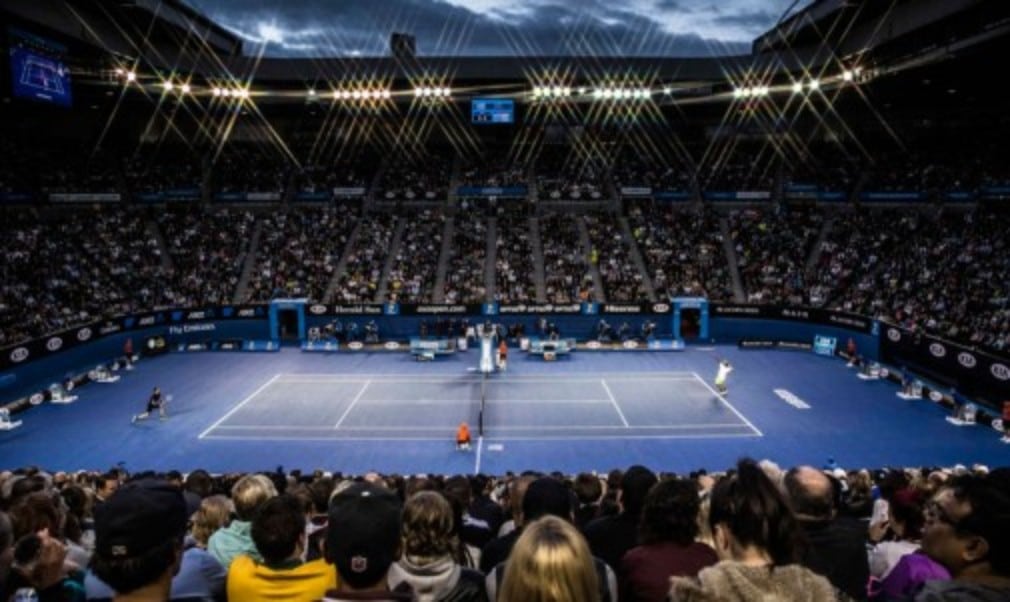 Named after an Australian Davis Cup legend who won five Davis Cups, Rod Laver Arena plays host to the biggest matches at the Australian Open. With a seating capacity of 14,820 it has witnessed some of the great Grand Slam finals since it first opened in 1988.  As well as being one of the biggest concert venues in the world, it has also hosted basketball matches, boxing fights and the gymnastics at the 2006 Commonwealth Games.

But in 2001 it had a makeover for the Davis Cup final between Australia and France. Hoping to play to the Australian team’s strengths, a portable grass court was shipped in for the tie, the first final on grass since 1986, when the Aussies beat Sweden 3-2 at Kooyong.

Unfortunately for the hosts, Nicolas Escude was also a grass court specialist and he upset world No.1 Lleyton Hewitt before beating Wayne Arthurs in the deciding rubber to help France claim an unlikely 3-2 victory.

Two years later the grass court was brought in again, and this time the move paid off as Hewitt and Mark Philippoussis helped Australia beat Spain for their 28th title.

The spiritual home of the Davis Cup, Longwood Cricket Club in Boston hosted the first Davis Cup final in 1900. The brainchild of Dwight Davis, it started off as a two-team competition between the USA and the British Isles. Of course, back then it was known as the International Lawn Tennis Challenge, tennis’ answer to sailing’s Americas Cup.

James Dwight, president of the USTA, was a member at Longwood and it was Dwight who established the rules and oversaw the initial series. Davis commissioned the trophy, which unofficially became known as ‘Dwight’s Pot’.

Held on three days between Wednesday 8th and Friday 10th August, the pot stayed in American hands as the hosts won the best-of-five match series 3-0, with Davis and US National champion Malcolm Whitman winning their singles rubbers before Davis teamed up with Holcombe Ward (with whom he won the US National Doubles Championships in 1899) to seal the victory against a team featuring future Wimbledon champion Arthur Gore.

The Americans defended their title with a 3-2 victory at Crescent Athletic Club in New York in 1902, but the following year a two-man British team comprising of brothers Laurence and Reggie Doherty returned to Longwood to claim the title for the first time.

One of the most iconic venues in sport, the Plaza de Toros Las Ventas is a famous bullring in Madrid. Regarded as the home of bullfighting in Spain, the arena has a seating capacity of 25,000 and in 2008 it was converted into a clay-court for Spain’s Davis Cup semi-final against USA. The Spanish team had expressed concern that the high altitude would favour the American players, but a sea of red and gold spectators chanting ‘Ole, ole’ helped carry the hosts to a 4-1 victory.

‘El Toro’ himself, Rafael Nadal, who had already won Roland Garros, Wimbledon and an Olympic gold medal that summer, eased to a 6-4 6-0 6-4 victory over Andy Roddick to secure an unassailable 3-1 lead in a charged atmosphere.

"It was great to win at home, there is no atmosphere like this," said Nadal.

"I don't think you can draw up a tougher scenario than playing Nadal on clay in front of a crowd like this," said Roddick, who saved five match points on his own serve before succumbing to defeat.

Spain went on to beat Argentina 3-1 in Mar del Plata to win a third title in eight years, but Nadal was absent from the final with a right knee injury.

In December 1954, 25,578 spectators packed into the White City Stadium in Sydney to see the two powerhouses of tennis in a highly anticipated Davis Cup final as hosts and defending champions Australia took on USA.

The Americans, whose captain Bill Talbert had been hospitalised by a liver infection only a few weeks earlier, were flying high after beating Sweden 5-0 in the Inter-Zonal final in Brisbane the week before, but Australia had won the previous four finals, all against the USA.

The first day’s rubbers pitted Lew Hoad against Tony Trabert before Ken Rosewall took on Vic Seixas, matches that the Australians had won in the 1953 final, but the USA took a 2-0 lead on the opening day before the in-form American pair teamed up to defeat Hoad and Rosewall to seal an unassailable 3-0 lead.

Australia went on to regain the title the following year, and won the Davis Cup 15 times in 18 years between 1950 and 1967 but the record attendance – the largest crowd at a sanctioned tennis match – stood for fifty years, when the Olympic Stadium in Seville hosted the 2004 final between Spain and USA.