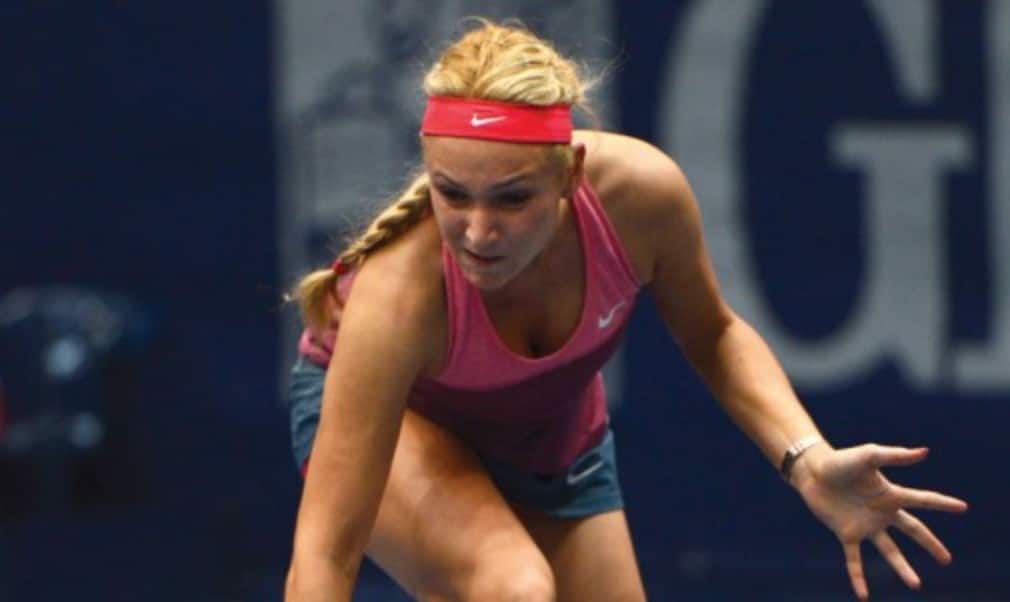 Vekic, who will celebrate her 18th birthday at the end of June, is tall, blonde and elegant and comes from Eastern Europe. The similarities with Sharapova do not end there. Like the world’s highest-earning sportswoman, Vekic has a steely determination and strength of character that mark her out as an exceptional prospect.

The Croatian’s mental fortitude was evident in Kuala Lumpur in April, when she became the youngest winner of a title on the Women’s Tennis Association tour since Vania King in 2006. Vekic came from a set down in four of her five matches and beat Dominika Cibulkova, who has been one of the players of the year, in the final. Recovering from the disappointment of missing three match points at 5-2 in the final set against the Australian Open runner-up, Vekic eventually sealed a hard-fought 5-7 7-5 7-6(4) victory.

Vekic’s talent was clear when she reached the final of the Tashkent Open on her debut in the main draw of a WTA event two years ago. On her Grand Slam debut at the Australian Open the following year she beat Andrea Hlavackova, who was ranked more than 50 places ahead of her in the world rankings. The comparisons with Sharapova were underlined last summer, when Vekic beat three top-50 players en route to the Aegon Classic final in Birmingham before falling to Daniela Hantuchova. Sharapova had reached the semi-finals at the Edgbaston Priory club as a 16-year-old qualifier in 2003 and won the title there a year later before going on to record her historic triumph at Wimbledon.

However, not everything has gone Vekic’s way since her stunning debut at Edgbaston. She won only four more tour-level matches in 2013 and went six months without recording a victory before beating Olivia Rogowska in Indian Wells in March. “This is my first full year on tour,” Vekic said. “I made the transition last year and it was good, but now it just gets really tough. There are lots of expectations and I have lots of expectations for myself. I have a good team that will help me get through it.

“At first I thought the transition was easier, but it gets tougher. You think you’re there but you’re nowhere near there yet and you’ve got lots of work to do. When I play the top players I see how much I have to improve, how much stronger I need to get. You realise playing those matches how much you need to improve.”

Vekic clearly learns quickly. Her victory over Cibulkova in the Kuala Lumpur final – her first win over a top 10 player – came barely a month after she had lost in straight sets to the Slovakian in Indian Wells. “It’s hard to stay patient,” Vekic said. “I just want to win everything right now, but I have a good team around me that helps me stay on the ground and helps me make the right decisions in terms of scheduling.”

That team includes David Felgate, the British coach who helped turn Tim Henman from a talented teenager into a top 10 player. Felgate, who has also worked with Xavier Malisse and Nicole Vaidisova, first started coaching Vekic when she was just 11. While Serena Williams and Li Na have been striking blows for the thirty-somethings, there are signs of a changing of the guard in women’s tennis. Sloane Stephens and Eugenie Bouchard have both made Grand Slam semi-finals and the likes of Vekic, Elina Svitolina, Caroline Garcia and Belinda Bencic are all making their mark.

Vekic, who first broke into the world’s top 100 at the start of last year, said: “As I did well last year I said I wanted to improve my ranking. Everyone has their own career and some go slower than others.” Of her contemporaries, she believes only time will tell who will enjoy the greatest success. “When we’re all around 25 it will be interesting to see who is up there,” she said.

Wimbledon is almost a home Grand Slam tournament for Vekic, whose training base is in London. She will hope to be on English soil when she celebrates her 18th birthday, which falls during the opening week of the Championships. And what better way to celebrate her coming of age than with a lengthy run at the All England Club?

This article appeared in tennishead Volume 5 Issue 3. Subscribe to the magazine today or download tennishead on iTunes.