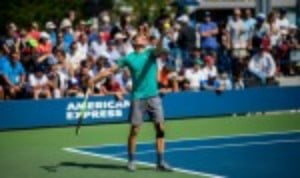 The Belgian has been playing some solid tennis in Flushing Meadows. His third round opponent, Gael Monfils, retired with a leg injury but he was pushed to five sets in the second round by Guido Pella.

“It was a great match in the first set," he said of his brief contest with Monfils. “In the second, I saw he was not running 100%, so it was tough to stay focused. I'm happy to be in fourth round for the first time.”

Goffin’s aggressive play and early ball-striking is what makes him so dangerous. The 26-year-old is most at ease at the baseline but he is highly efficient in the forecourt.

The Belgian has played with strapping on his left knee throughout the tournament, and he knows he will be have to work hard against the attack-minded Russian.

Rublev is also aware of the task he faces. “If I want to compete against him, I have to take chances,” said the teenager. “I have to try to show my game, to try to play my rhythm and play the way I want. He is top 10. He's one of the top players."

If Goffin is fit and well, he has an excellent opportunity to reach the last eight and equal his best result at a major.

The match is scheduled not before 12 noon local time on Louis Armstrong court.