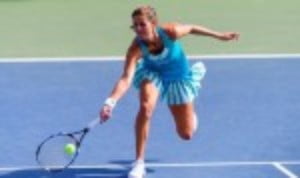 The 28-year-old has been a professional since 2005 and she is currently enjoying the most successful season of her career. She has featured in three finals – Washington D.C, Bucharest and Mallorca – and also reached the last eight in Cincinnati.

Goerges also played a major part in Germany’s Fed Cup play-off win against Ukraine in April – winning both her singles rubbers. Her impressive victory over Elina Svitolina was one of seven Top 20 wins she has enjoyed this year.

She made some changes to her team two years ago and is coached by Michael Geserer and Matthias Mischka, but she does not put her recent upturn in fortunes down to anything specific.

“I am very happy with the results I am having right now,” she said. “It’s a combination of everything, if you work hard and you do the right things, you win some matches.

“Nothing has changed for me since the end of 2015, but the results have changed so I can only be happy about that.”

Goerges has reached the fourth round in Australia twice and she made the last sixteen of Roland Garros in 2015, but does she now rate the US Open as her favourite slam?

“It’s not about the results though,” she said. “I just love Australia in general.”

Her fourth round opponent will be Sloane Stephens, who beat her recently in Cincinnati.

“I am obviously expecting a tough match as that’s what you have to expect at a Grand Slam,” said the German. “It doesn’t matter who you are going to face, it’s going to be a tough one.”

“We’ve both been playing well and it is good that we have already played each other, but it is on a different stage now and it’s a different tournament. We both start from zero and the better player will win.”