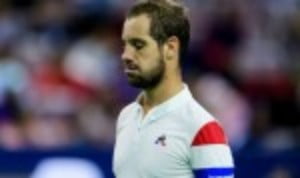 Richard Gasquet and Pierre-Hugues Herbert, a scratch doubles pairing, defeated Ruben Bemelmans and Joris De Loore 6-1 3-6 7-6(2) 6-4 to give the hosts a vital 2-1 advantage ahead of the final day of action in Lille.

There has been much consternation surrounding Yannick Noah’s decision to omit Nicolas Mahut from the French doubles team, but the result on Saturday afternoon vindicates his decisiveness.

Jo-Wilfried Tsonga now has the opportunity to seal victory for his nation in the fourth rubber on Sunday against David Goffin. The 32-year-old has encountered the Belgian No.1 on six previous occasions and won the majority.

If a fifth and final rubber is required, then Steve Darcis will take on either Gasquet or Lucas Pouille.

Gasquet and Herbert, roared on by a passionate home crowd inside Stade Pierre-Mauroy, started the match impressively. They combined well while their opponents lacked cohesion and intensity.

The French team took the opening gambit for the loss of just one game, however the second set was a much tighter affair. Breaks of serve were traded before Gasquet double-faulted to hand the initiative to their buoyant rivals.

Belgium had pulled level at one apiece, and they were soon in the hunt for more. With Gasquet serving at 3-3 in the fourth set, De Loore scudded a forehand return that clipped the forehead of the sprawling Herbert.

The spectators were less than enamoured with De Loore’s uncompromising style, but the Belgians did not seem to care. The underdogs had established a break and a 4-3 advantage.

Bemelmans had been Belgium’s star performer, but he stumbled when attempting to close out the set. He struggled to make a first serve and a hat-trick of fluffed volleys gave their opponents renewed hope.

A tiebreak was required to split the teams, and it was Les Blues who won it emphatically by seven points to two.

There had been a dramatic turnaround in the third set, and the French duo did enough see off their opponents in the fourth. The Belgian pair had performed well above their respective rankings, but they were unable to prevent their overjoyed opponents from moving clear on the scoreboard.