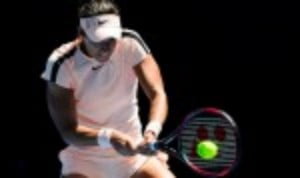 The French No.1 enjoyed a comprehensive 6-3 7-5 success over former Top 10 player, Lucie Safarova, to progress into the second round.

Her reward is a meeting with Ekaterina Makarova, who she defeated in straight sets en route to the Wuhan title last October.

"I'm definitely very happy with the win and relieved to get through in two sets because I was up and had a bad game," admitted Garcia. "She [Safarova] kept believing and fighting, so I'm really happy to be in the second round because she's always a tough player."

Also in first round action, Angelique Kerber breezed past Barbora Strycova 6-2 6-1 in just 59 minutes. It’s the German’s 13th win of a busy and productive opening to 2018, and she will challenge Sara Errani next.

The Italian, a former champion in Dubai, dismissed Lesia Tsurenko 6-4 6-3.

"I think I played a good solid match,” explained Kerber. “It's always tough to play against her [Strycova]. You never know what will happen. She's always a fighter, but I'm happy to have won the match in two sets."

The top four seeds, Elina Svitolina, Garbine Muguruza, Karolina Pliskova and Jelena Ostapenko, will all take to the court for the first time on Wednesday.

Petra Kvitova, who triumphed in Doha last week, has withdrawn from the tournament.