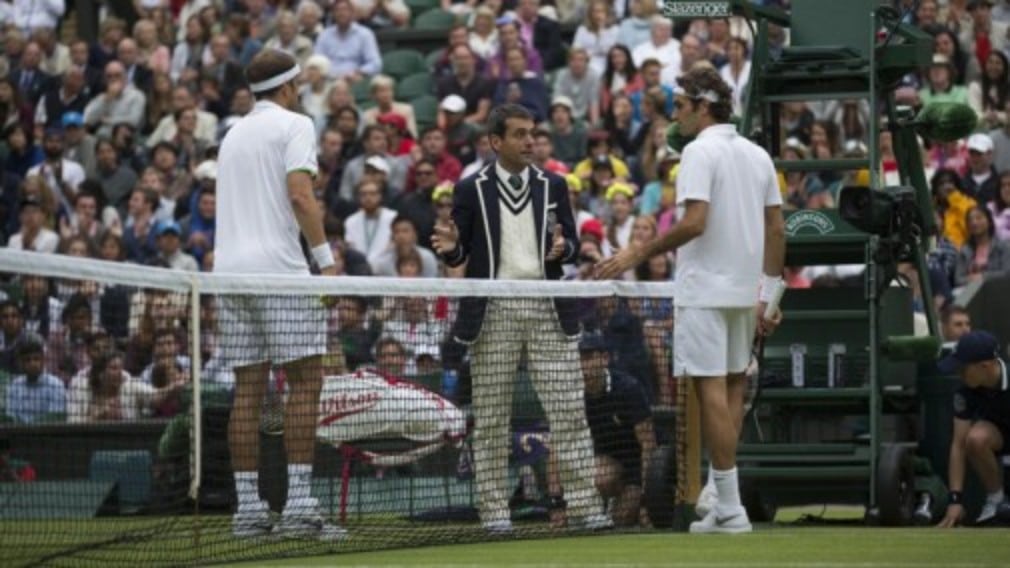 The fourth seed was leading 6-4 4-3 when play was suspended due to rain and the roof was closed. While all other matches around SW19 were cancelled due to the wet weather, Federer and Muller were soon back out and the Swiss broke in the 12th game of the set to take a commanding lead. The seven-time champion continued to look impressive in the third and it didn't take him long to wrap up victory and book his place in the next round against either Marcel Granollers or Santiago Giraldo, whose match was suspended at two sets all.

"It was really a serving contest out there and I’m happy I made it through," said Federer, who won 91% of his first-serve points. "The second set was tough with a rain delay and I wasn’t having many looks at his serve so I was happy to break at 6-5."

Nick Kyrgios saved a remarkable nine match points to stun No.13 seed Richard Gasquet 3-6 6-7(4) 6-4 7-5 10-8 in a thrilling contest. The Australian, who at 19 is the youngest player left in the draw, also saved 14 of the 16 break points he faced to record the biggest win of his career.

“It was an unbelievable match,” said Kyrgios, who will face 20-year-old Jiri Vesely in round three. “At match point against me, I just went through my routine and took my time and fended them off but when I got my opportunity I took it and I am stoked. I was nervous but I knew if I started playing my own game I had my chance."

The only other man to save as many match points in a Grand Slam singles victory was Vincent Spadea against Florent Serra at the French Open in 2004.

"It's a massive stepping stone for me to finally reach the third round of a Grand Slam," said the Australian. "I'm going to take a lot of confidence moving forward. My goal is to become the No.1 player in the world."

Milos Raonic reached the third round at Wimbledon for the first time after losing just six of his first service points in a 6-3 6-4 6-4 victory over Jack Sock. The eighth seed needed just one hour and 40 minutes to power his way past Sock and set up a meeting with Lukasz Kubot, who beat Dusan Lajovic 6-7(4) 7-6(4) 6-43 7-6(3).

“I want to do much better than I have to this point and than I have today,” said Raonic. “I’ve just tried to focus more on the ways I start the points, and then everything else has come together following that.”

“I was able to break his serve early each set so I could relax more,” said the 10th seed. “He didn't have a big serve so I was able to put some pressure on his service game. Hopefully I can now win my next match and make a big jump here.”