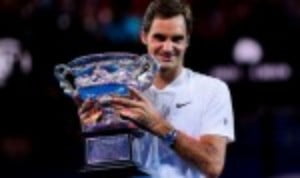 The majestic Swiss defeated Marin Cilic 6-2 6-7(5) 6-3 3-6 6-1 in a roller-coaster final to successfully defend his Australian Open crown and further add to his astonishing list of accomplishments.

The 36-year-old was often rushed and harried by the Croatian, but roared on by his vociferous supporters, he found a way to ensure his name would be carved on the Norman Brookes Challenge Cup for a record-equalling sixth time.

Federer took the scenic route against his resilient opponent, however he refused to let a fourth set wobble derail his bid to achieve a third Grand Slam success after his 35th birthday.

His joy was immediately apparent after converting his first match-point, and he continues to cherish every triumph as if it's his last. On current form though, this is unlikely to be the last time he departs a major undefeated.

“I’m so happy, it’s unbelievable,” said an emotional Federer as he struggled to hold back tears. “It’s a long day waiting for the final, and it’s easier when it’s in the afternoon time and you sleep, eat and go out there and do your best and that’s it.

‘When it’s at night, you think about the match all day and it’s tough. I’m happy it’s over now either way, but of course winning is an absolute dream come true.

“The fairy-tale continues for us, for me, and after the great year I had last year, it’s incredible.”

Cilic was overcome with nerves in the early stages, and it looked like a fourth men’s final in a row at Grand Slam level would end in double-quick time.The 2014 US Open champion rallied after a dreadfully poor beginning though, and contributed to an entertaining spectacle.

The 29-year-old had his chances in the first game of the decider to wrestle control and snatch the lead for the first time, but he was unable to capitalise on a productive passage of play.

“It was an amazing journey for me to come here to the final,” said the Croatian. “It could have been the best two weeks of my life, but today was a tough match.

“I had a slight chance in that game at the beginning of the fifth set, but Roger played great.”

The main talking point prior to the match was the decision taken by organisers to close the Rod Laver Arena roof due to the heat and humidity in Melbourne.

The organisers have since stated they simply were following their rulebook, but a few former players on social media – Greg Rusedski and Pat Cash – were less than enamoured by the decision to play the championship match of an outdoor tournament indoors.

Unlike Federer, Cilic had not played under the roof and the change in conditions perhaps contributed to his shaky start. He fluffed a difficult overhead to lose serve immediately and was trailing by a double-break after just nine minutes of action.

Federer took the opening stanza with ease, but the second set was more competitive. Both players had chances to establish control, however a tiebreak was eventually called into action.

The shootout was equally tight, but a stinging return followed by a forehand winner enabled Cilic to attain a 6-4 advantage – and he converted his second set-point to restore parity.

The Croatian bellowed with delight as he levelled the match, but his joy was short-lived. Federer stormed into an early third set lead and then continued to dominate.

The Swiss took another giant step towards the finishing line when he managed to achieve a break in the opening game of the fourth set. It appeared the match was heading towards a rapid conclusion, but Cilic was not done yet.

Federer made just 36% of first serves in the fourth set, and as a consequence, he offered his rival an avenue back into the the contest. Cilic gleefully capitalised on his opponent’s struggles and deservedly forced a decider.

The Croatian had outplayed the Swiss from the baseline in the closing stages of the fourth set and he began the next with a spring in his step. He applied significant pressure in a desperate effort to strike first, however Federer weathered the storm and then pushed for home.

Cilic dumped a forehand into the net to fall 2-0 behind – and this time there was no stirring response.