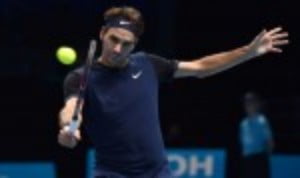 The Swiss claimed a 7-5 6-2 victory at the O2 Arena to condemn Djokovic to his first defeat since August. The last time Djokovic tasted defeat was to Federer in the final in Cincinnati, although he had his revenge in the US Open final three weeks later.

In the 43rd meeting between the pair – with the rivalry finely poised at 21 wins apiece – Federer took an evenly matched opening set, snatching a late break with a deft half-volley drop shot.

Djokovic had not lost a match indoors in 38 matches – his last defeat coming at the hands of Sam Querrey in Paris three years ago, but he was far from his best, an uncharacteristic 22 unforced errors coming from his racket, and just 12 winners.

Federer broke for a third time to take a 4-2 lead, and backing it up with a dominant service hold to force Djokovic to serve to stay in the match. The top seed saved one match point, but he surrendered a second after an unsuccessful HawkEye challenge.

"You have those days when you are not feeling your best, not even close to the best," said Djokovic. "Credit to Roger for mixing up the pace, giving me always a different ball. He used the slice and spin very wisely. He served very efficiently. I made a lot of unforced errors.

"I just handed him the win, especially in the second set. But that's sport. Sometimes these kinds of matches, these kinds of days happen. The good thing is that it's a round-robin system so I still have an opportunity to reach semi-finals."

Djokovic will take on Tomas Berdych on Thursday while Federer will meet Kei Nishikori, who kept his hopes of qualifying for the semi-finals alive with a 7-5 3-6 6-3 victory over Berdych earlier on Tuesday.