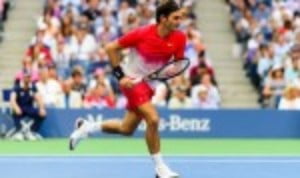 In a war of attrition between two veterans struggling physically, the persistent Swiss eventually prevailed 6-1 6-7(3) 4-6 6-4 6-2.

It’s a second consecutive five-set victory for Federer and his perseverance can only be admired. His movement did appear to be compromised, though, and he was insecure from the baseline as a consequence.

Federer, who entered the arena with a 16-0 record against Youzhny, began impressively and he claimed the first set for the concession of just one game. The Russian started carelessly however he gradually improved and his one-handed backhand became the source of much of his good work.

Federer’s game began to unravel in the latter stages of the second set. His unforced-error count began to rise at speed and he squandered a sizeable advantage before being edged out in a tiebreak.

The 19-time major winner endured more misery in the third set as his buoyant opponent earned a vital break in the fifth game with a scrumptious backhand return winner. Federer tried to respond, but the plucky Russian held firm and took the set by six games to four.

The Swiss had become engulfed in another ferocious tussle, but he regrouped and emerged the winner of a topsy-turvy fourth set to force a decider.

Federer’s back problem had been an issue for much of the match however he was not the only player feeling the pain. Youzhny began to suffer with cramp in the fifth set and it effectively ended his hopes of progression.

“These five-set battles are actually a lot of fun,” said Federer with a wry smile after the match. “I haven’t played a lot of guys with cramps in the last decade or so and the rules have changed. You are not allowed to get any support from the physio if you get cramps so it’s hard to watch, but unfortunately that’s how it is. I was feeling for Mikhail.”

Grigor Dimitrov’s six match winning run has come to an abrupt end. The No.7 seed came unstuck against the Russian shotmaker, Andrey Rublev. The teenage sensation took out the Bulgarian 7-5 7-6(3) 6-3.

The mercurial Russian, who unleashed 36 winners, is through to the third round of a major for the first time as he claimed his maiden Top 10 win. “It’s an amazing feeling, I’m just really happy,” he said.

“I know that Grigor is a much more experienced player than me and before the match I was thinking I have to play at my speed. I know with my speed, I can compete with anyone.”

Juan Martin del Potro enjoyed a trouble-free 6-4 7-6(3) 7-6(5) success over Henri Laaksonen to secure his spot in the round of 32. “My serve and forehand are very important for my game and I had a good feeling with both today,” said the 2009 winner.

“I think I can play even better in the next round so hopefully I can find my best level. I felt nervous at the beginning and at the end as well, but I’m so happy to be playing at the US Open.”

Alexander Dolgopolov made headlines for the right reasons as he surprised No.15 seed Tomas Berdych. The unorthodox Ukrainian took four sets to defeat the Czech, who struggled with a lower back problem.