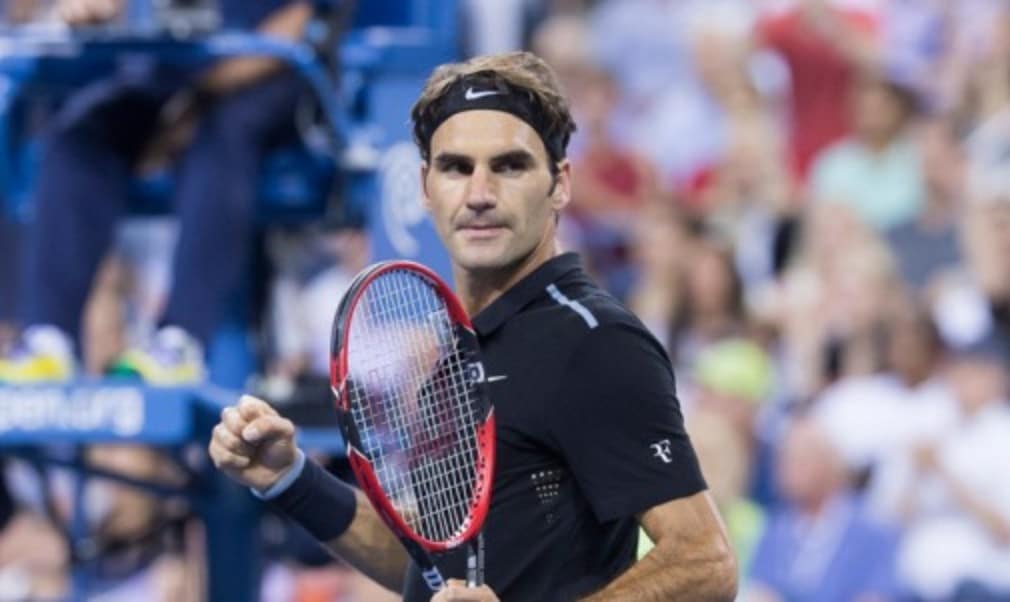 Federer puts on a show for Michael Jordan

The five-time US Open champion and No.2 seed in New York this year claimed a single break in each set to wrap up a 6-3 6-4 7-6(4) victory in two hours and seven minutes on Arthur Ashe. The 33-year-old produced a series of stunning backhand passes as the world No.76 attacked the net relentlessly throughout the contest, and at one point hot-dogged a dead ball that clipped the Australian as he walked back to the baseline, drawing a laugh from Jordan and the crowd.

Federer was left red-faced by a failed slam-dunk smash in front of his idol early in the second set, but moved into a comfortable two-set lead. Matosevic rallied in the third and stole a break of his own to force a tie-break, but Federer rarely found himself threatened.

“I guess it's a good thing that I played someone like him, because my next opponent is going to be a serve-and-volley player as well,” said Federer, who faces Australian Sam Groth in the second round. “I definitely feel like I'm serving better overall with the new racket. I think it's definitely helped me in this regard. I do feel easier power.”

Serena roars past Townsend in style

Decked out in a monochrome leopard-print dress, Serena Williams cruised to a 6-3 6-1 victory over teenage compatriot Taylor Townsend in 55 minutes. Townsend did what she could to push her all-court game to keep Williams on the run, but the world No.1 was simply too good in all departments for the 18-year-old, who at least appeared to enjoy herself as the crowd cheered for both women.

“I really went out and tried to have fun,” Townsend admitted. “I think I did a lot of good things on the court, and my game style and the player that I want to be will hold up well in the future.”

Williams remained laser-focused throughout the contest and proved her fitness with an impressive instant recovery after doing the splits mid-point. Vania King awaits in the second round after beating Francesca Schiavone 6-3 3-6 6-3.

"I've always liked her game, she gets a lot of balls back," Williams said. "She's another American – hey, at least an American will be going to the third round."

Watson ousted in an hour by Cirstea

Heather Watson arrived in New York on a high after returning to the top 50 and collecting a couple of prize scalps along the way this summer – so to be dispatched from the US Open in less than 60 minutes, 6-1 6-1 by Sorana Cirstea, was a huge disappointment for the Guernsey girl.

“The first few games were okay but as soon as I got broken she started playing well the rest of the match,” Watson admitted. “I didn’t play very well, made a lot of errors, lot of double faults. “She hasn’t been in great form and I’ve been having a good year, so I didn’t expect to play like this. It’s disappointing but it’s just another week.”

Having fallen at the same stage at last year’s US Open, Watson went without a win on the WTA tour until 2014, a situation that presents an opportunity to boost her ranking before the year is out.

“I’m going to be doing four weeks in Asia, starting in Seoul, then maybe Luxembourg,” she said. “With not many points to defend, that’s a positive thing for the rest of the year.”

Shock of the day

Fortunately for Watson and 2004 champion Svetlana Kuznetsova, beaten 3-6 6-2 7-6(3) by Marina Erakovic, there was only one story in town on Tuesday. Fifteen-year-old American wildcard CiCi Bellis’ 6-1 4-6 6-4 victory over No.12 seed Dominika Cibulkova was every bit as staggering and well-earned as the scoreline suggests.

Bellis, whose tennis hero is Kim Clijsters and whose first US Open memory was of a Maria Sharapova victory in 2006, is the youngest winner of a main draw match at Flushing Meadows since Anna Kournikova’s run to the fourth round in 1996, also at the age of 15.

The junior world No.2 earned her wildcard with victory in the US girls’ national championships earlier this summer, but had just 12 senior-level matches to her name before the US Open, all on the lower-tier ITF circuit.

With a packed Court 6 rocking to chants of ‘CiCi, CiCi’, Bellis fought back from a break down in the third set with a string of pure strike forehands to stun the Australian Open finalist and set up a second-round showdown with Kazakhstan’s world No.46 Zarina Diyas.

Performance of the day

Another American woman, another sterling performance. Madison Keys was all but untouchable during her 45-minute 6-0 6-3 win over Jarmila Gajdosova, particularly in the first set. The No.27 seed shot out of the blocks, moving 3-0 up in just five minutes as her Australian opponent saw forehand after backhand blaze past into the backstop on Louis Armstrong.

In the 18 minutes it took to wrap up the opener Keys dropped seven points, taking her foot off the gas in the second, which took all of 27 minutes. Could this be her breakthrough Slam?

34: Age of Victor Estrella Burgos, the oldest US Open debutant – and first Dominican – to play at a Grand Slam. The world No.80 marked the occasion in style, beating Igor Sijsling 2-6 6-4 6-3 6-2 in front of a wild Court Six crowd.

Estrella Burgos faces Borna Coric in the second round after Croatian teenager upset No.29 seed Lukas Rosol. At 17, Coric will be half his opponent’s age.