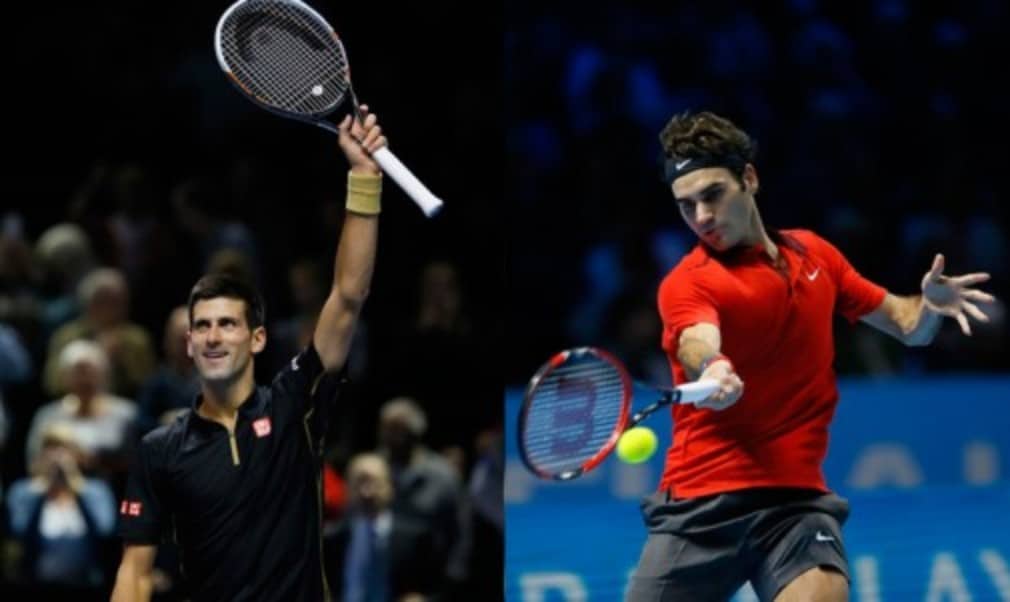 The 17-time Grand Slam champion produced a stunning comeback in a thrilling semi-final to claim a 4-6 7-5 7-6(6) victory in two hours and 48 minutes – the only singles match to last longer than two hours in London this week.

The world’s top two players will now go head-to-head in Sunday’s final for the final bragging rights of the season after Djokovic defeated Kei Nishikori 6-1 3-6 6-0 in the day’s first semi-final.

Federer cannot catch Djokovic in the world rankings after the Serb wrapped up the year-end No.1 spot on Friday, but would close the gap ahead of the 2015 season if he can end the season with victory over one of his greatest rivals and a seventh World Tour Finals victory.

Federer had won 14 of 16 previous encounters against Wawrinka and had not dropped his serve in his three round-robin matches in London, but Wawrinka came out firing and broke the world No.2 for the first time this week as he grabbed an early lead.

The Swiss No.2 had struggled for form in the latter part of the season, winning just one match on the ATP tour since the US Open before he arrived in London, but looked to have rediscovered the touch that saw him win his first Grand Slam title in Melbourne earlier this year as he extended his advantage, breaking Federer for a second time for a 5-2 lead.

Federer did break back to reduce the deficit, but Wawrinka held his nerve to serve out the opening set. In a tense second set in which neither player was able to establish a break, Wawrinka was the first to blink as he was broken to love in the final game as Federer forced the match to a decider.

But any signs that it was Federer in the ascendancy were quickly quashed as Wawrinka replied immediately, breaking in the opening game of the third set, but Federer refused to give in, saving three match points as Wawrinka served for the match at 5-4 before saving a fourth in the tiebreak to inflict a heartbreaking defeat on his Davis Cup team-mate.

"I think I'm lucky tonight," Federer admitted. "I think Stan played better tennis from the baseline and that usually does the job here on this court. But I kept believing and kept fighting and kept making him play the extra shot. He had it on his racket – it is tough this way but obviously I am delighted to be in another final here in London."

Djokovic had spent little over three hours on court and dropped just nine games in his three round-robin wins and looked set to continue in a similar vein as he broke Nishikori twice en route to wrapping up the opening set in 23 minutes.

However, the Serb, who is unbeaten on indoor courts in over two years, suffered a second-set wobble as Nishikori clawed his way back into the match. The world No.5, who upset Djokovic in the US Open semi-finals, took full advantage, hitting two inside-out forehands to break for a 5-3 lead and force the match to a decider.

Nishikori had break points early in the third set, but Djokovic appeared to rediscover his focus to race through the third set as the match began to slip from Nishikori’s grasp, double faulting on match point to hand the victory to the top seed.

“Honestly, today I found it a little bit difficult mentally to concentrate throughout the whole match,” admitted Djokovic. “After three emotional matches, especially yesterday when I achieved the goal to finish as No. 1 of the world, I felt a little bit flat emotionally today.

“I was fortunate because in the beginning of the third set he had breakpoints.  If he broke me, the match could have gone either way.  I managed to find that little bit of strength and get a win today.”

“I would say I was close, for sure,” said Nishikori.  “Even [if] the last set was a bagel, I had couple of chances in the first couple of games. The first set he played really good, but the second set I start playing well.  He got little bit tight, I took some risks.  Everything worked well in the second.

Meanwhile, world No.1 pair Bob and Mike Bryan reached their sixth final at the end-of-season finale with a 6-0 6-3 victory against Roland Garros champions Julien Benneteau and Edouard Roger-Vasselin. They will face Ivan Dodig and Marcelo Melo in the final after the pair came from behind to beat Australian Open champions Lukasz Kubot and Robert Lindstedt 4-6 6-4 10-6.