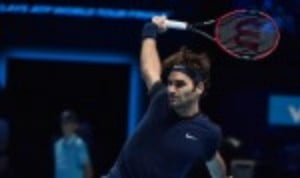 The 34-year-old Swiss will now face either home favourite Andy Murray or compatriot Stan Wawrinka in the last four following his 7-5 4-6 6-4 victory.

In front of another adoring crowd on Thursday afternoon in London, the man who last won the event in 2011 edged a tight opening set 7-5. World No.8 Nishikori was pummelling away at his opponent’s backhand but Federer mixed it up on that wing, with both his top spin shots and particularly his slices proving effective.

He seemed destined for a comfortable victory, moving ahead 4-1 in the second. But Nishikori stunningly claimed five games on the bounce to level the contest. With his back against the wall, Nishikori stepped up his aggression and began to rip the ball past Federer.

After recovering from 0-40 to hold serve at 1-1 in the deciding set, the Swiss once again led 4-1 only to be pegged back to 4-4. However, this time, he held firm on serve to edge 5-4 ahead and thrust the pressure on Nishikori. The Japanese star threw in a costly double fault to send the third set’s tenth game to deuce, before a forehand error and then a powerful Federer forehand-overhead combination clinched the match for the 17-time Grand Slam champion.

Asked about who he’d like to face on Saturday, Federer said: “I have no preference. At this point everything is tough and fun at the same time because it’s cool playing those kind of guys [Murray or Wawrinka] in the semis of the World Tour Finals.

“This is what it’s about. This is where I wanted to be. Of course, I’m going to be happy to be there myself, seeing them battle it out tomorrow."

Nishikori’s competitive season is over for another year but he highlighted his focuses for improvement: “I’m trying to work on to come into the net a little more. I think I’m doing really well…I want to keep doing that.

“I think it’s going to be really important to make a lot of first serves. I’m not the guy acing a lot, you know. Also, try to be healthy, I think that’s most important," he added.

Three-time defending champion Novak Djokovic also again takes his place in the semis after a 6-3 7-5 triumph over Czech Tomas Berdych. Needing only one set to advance, the Serb got the perfect start by breaking for a 2-0 lead, but Berdych hit straight back to level and some patient play from the baseline allowed him to hang tough with the ten-time major winner until the eighth game. At 3-4 though, Djokovic broke through and duly served out the set to secure his part in Saturday’s proceedings.

The world No.1 will face Rafael Nadal for a 46th time with a place in the final on the line and a chance to even their head-to-head series at 23-all. Like with most of his rivals, the Serb has dominated Nadal in 2015, winning all three of their matches comfortably in straight sets, most recently claiming a 6-2 6-2 win in Beijing.

They’ve duelled three times previously at The O2. Djokovic won the 2013 final and then they have a win apiece over one another in round-robin play in 2009 and 2010. If Andy Murray defeats Stan Wawrinka in Friday’s evening session, it will be the first time since 2010 that the “Big Four” will make up the quartet of semi-finalists at the end-of-year championships.

In the doubles, Bob and Mike Bryan saved five match points to win an extraordinary encounter with Brit-Aussie duo Jamie Murray and John Peers. The first two sets were split on tiebreaks, before Murray and Peers stormed into a 9-5 lead in the match tiebreak. A few incredible misses later, the American twins had got back on level terms. Then, the pendulum swung back and forth all the way to 15-14, where a mishit Peers return looping way over the baseline sealed the defending champions’ victory and semi-final place.

In the day’s other match, Australian Open champions Simone Bolelli and Fabio Fognini grabbed a win to end their O2 campaign on a high, with the Italians beating already-crowned group winners Rohan Bopanna and Florin Mergea 6-4 1-6 10-5.