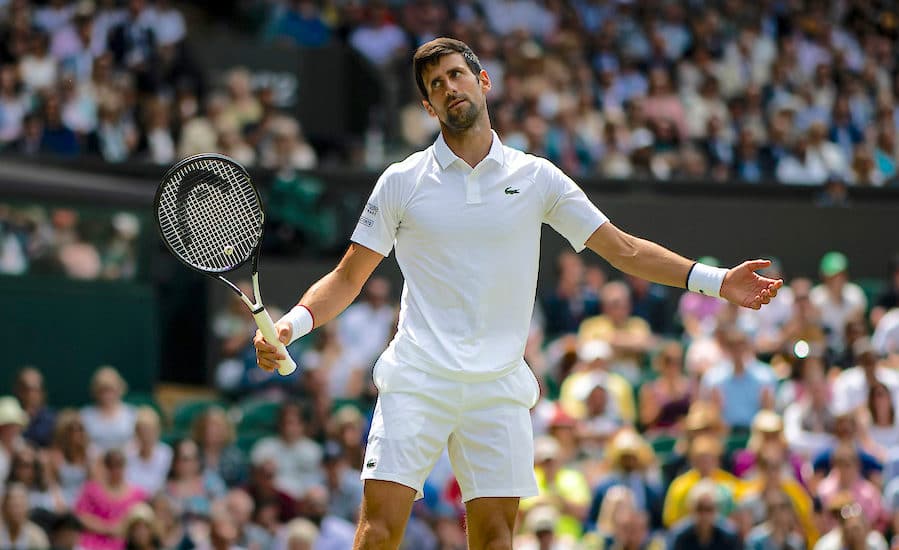 Billie Jean King was right. Tennis is war. Mental strategy is as important as physical prowess and ability. A dominant player like Novak Djokovic must combine a wide variety of effective shots with excellent shot selection. The characteristics of an effective shot are easy to define. For example, the amount of spin and speed or the degree of positional accuracy etc. But, how do we think about optimal shot or strategy selection? We asked eminent maths professor and expert in tennis data analytics Dr Leonidas Spiliopoulos to explain more

The answer is provided by game theory, a mathematical framework whose early applications included the analysis of global nuclear strategy and war in general. Game theory is concerned with how two or more players interact and what their optimal strategy is. If both players are choosing their optimal strategy against their opponent then their behaviour is described as being at the Nash equilibrium (yes, THE John Nash, who was played by Russell Crowe in the movie “A Beautiful Mind”!).

A common piece of advice for sports players, in line with the theory, is to be unpredictable to keep your opponent guessing. This means that what has happened in previous points should not affect how you play in the current point. For example, if you tend to serve two times in a row down the  middle (the T), then an astute opponent can learn to predict this pattern and exploit it.

The theoretical optimal play can be derived for all shots in tennis, but let’s focus on the most important one—the first serve. As Craig O’Shannessy rightly pointed out in his February 7, 2019 article, the serve and first return are the most crucial shots determining the final outcome of a point. And it all begins with the serve, perhaps the most violent shot in tennis along with the smash! If you were not convinced of the analogy that tennis is war, remember, they didn’t call Philippousis the Scud (missile) for nothing! To simplify matters somewhat, let’s think about the direction of a serve to each court (ad or deuce) and consider two directions: hitting it wide (W) or down the T (T).

How good are professional players at being unpredictable in their selection of serve directions? The first graph shows the absolute difference in % of serves directed toward W or T each court and player. Ideally, if a player is perfectly unpredictable each of these should be equal to or very close to zero. Players on the left are on average less predictable, players on the right significantly predictable. The graph shows for each court the total of both sources of predictability based on the previous serve direction (W or T) and whether the previous point was won or lost. Below we break these down into each source. 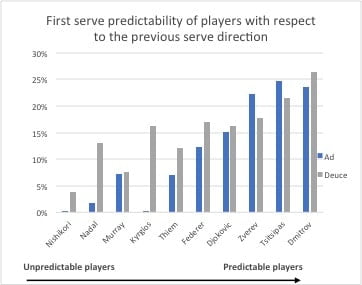 How about the younger generation of contenders? Previous research conducted at the Max Planck Institute for Human Development found that ranking and degree of experience matter (Spiliopoulos, 2018). On average, inexperienced and lower ranked players tended to be significantly more predictable. This is indeed the case with the contenders. Tsitsipas, Zverev, and Dimitrov deviate significantly more than the old guard (20%-30%) and have huge potential for improvement. Kyrgios is perfectly unpredictable in the ad court but very predictable in the deuce court (17%). Thiem is the exception as he is less predictable than Federer and Djokovic, yet more predictable than Nadal and Murray.

Let’s now consider how winning or losing the previous point affects serve direction shown in the second graph. Federer’s reputation as a cool-headed player is justified, as he is not influenced at all (0% for both ad and deuce courts), followed closely by Andy Murray, Novak Djokovic and Nadal (ranging from 0.5% to 3%, depending on the court). The most experienced and highly ranked players have conditioned their mental game to be relatively impervious to what happened in the previous point. Zverev, Thiem and Nishikori are moderately affected. However, Tsitsipas is highly predictable in the deuce court (8%), Kyrgios in the ad court (9%) and Dimitrov in both courts (3%-4%). These three contenders react significantly to a previous win/loss and are therefore the most predictable—they need to work more on “letting go” of the previous points. 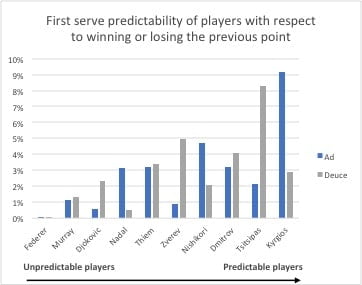 The discussion about the persisting dominance of the “old guard” of players typically revolves around arguments such as improvements in training, health and fitness regimes, which allow them to remain at their peak performance for more years. While all valid, another explanation is that players are overcoming decreased physical prowess with better shot and strategy selection in general. That is, instead of playing harder, they play smarter. As evidenced by the Wimbledon results, the contenders still have a lot to learn as the old guard has a distinct advantage over them in terms of the mental game due to their experience. Our results show that there is potential to detect game patterns even in some of the top players. We know from previous research conducted (Spiliopoulos, 2012) that being unpredictable, or playing randomly, is quite difficult; yet at the same time people have the ability to learn these patterns. However, players need guidance to sharpen their skills in complex games such as tennis where the number of patterns is enormous. Contenders can either learn the slow and hard way through match experience or use data analytics to learn what patterns their opponents exhibit and then use the insights of game theory to determine how to optimally exploit them, whilst in turn learning to be more unpredictable.