EXCLUSIVE: It’s not all about the aces! Ground breaking analysis from eminent maths professor reveals WTA’s most unpredictable server

tennishead’s resident expert in ‘Game Theory and Decision Making’, Dr Leonidas Spiliopoulos, Research Fellow at the Max Planck Institute for Human Development, analyses the WTA Tour’s best players to uncover who tops the list in this key determinant of a succesful serve.

Tennis, like all sports, is at its core a game of both skill and strategy. The top professionals play to their strengths and focus on their opponents’ weaknesses. However, their strengths may also be well known to other players. This requires a delicate balance between aggressively taking advantage of these strengths/weaknesses and remaining as unpredictable as possible. In an earlier article we looked at the serve predictability of top male players— let’s take a look now at the comparable statistics for top female players with the most data available.

Serve directions can be analysed using the mathematical framework of game theory. In the modern tennis game, serves have become increasingly important as the probability of breaking serve has fallen. Consequently, a greater emphasis has been placed on serving even in terms of coaching and strategy.

To simplify matters somewhat, let’s think about the direction of a serve to each court (ad or deuce) and consider two directions: hitting it wide (W) or down the T (T). According to game theory, if both players are choosing their optimal strategy against their opponent, then at this equilibrium the following must be true. What happened in previous points should not affect how a player serves in the current point. For example, if a player tends to serve twice in a row down the T, then this opens her up to be exploited. Knowing that this is the case, following a serve down the T in the previous point, the opponent will expect and be better prepared to receive the next serve down the T rather than wide. Let’s examine two pieces of information available from the history of game play and their possible impact on the serve direction of the current point.

The first is the serve direction in the previous point (served to the same court). For each court, the probability of serving down the T should be the same, regardless of whether in the previous point the serve was W or T. Suppose that a server tends to switch between W and T too often — then the receiver could predict that if the previous serve was W that the next one is more likely to be down the T and vice-versa. In fact, even when explicitly trying to be random/unpredictable, people have a tendency to switch between options more often than they should. This tendency is even found in many top professional players and tends to be stronger the lower the player’s ranking (Spiliopoulos, 2018a).

The second is that winning or losing the previous point should not affect the probability of serving to either direction (W or T) in the current point. There are two reasons why players may actually exhibit a behavioural dependency on winning and losing points. The first is that to remain unaffected and focused requires strong emotional control under pressure, often seen in top players, but not necessarily cultivated in lower-ranked players. The second is that people tend to stick with a strategy that works, therefore if serving W won the point before, they are more likely to serve W again. On the other hand, serving W and losing the previous point makes it more likely to switch strategy next time and serve down the T. This is called the win-stay/lose-shift heuristic and is often found to be the primary strategy that people employ (Spiliopoulos, 2018b).

How good are professional female players at being unpredictable in their selection of serve direction? The first graph shows the absolute difference in the % of the current serve direction conditional on whether the previous serve was directed wide or down the T, for each court and player. Ultimately, if a player is perfectly unpredictable the theory dictates that the difference be equal to or very close to zero. Players toward the left are more unpredictable, players on the right significantly predictable. 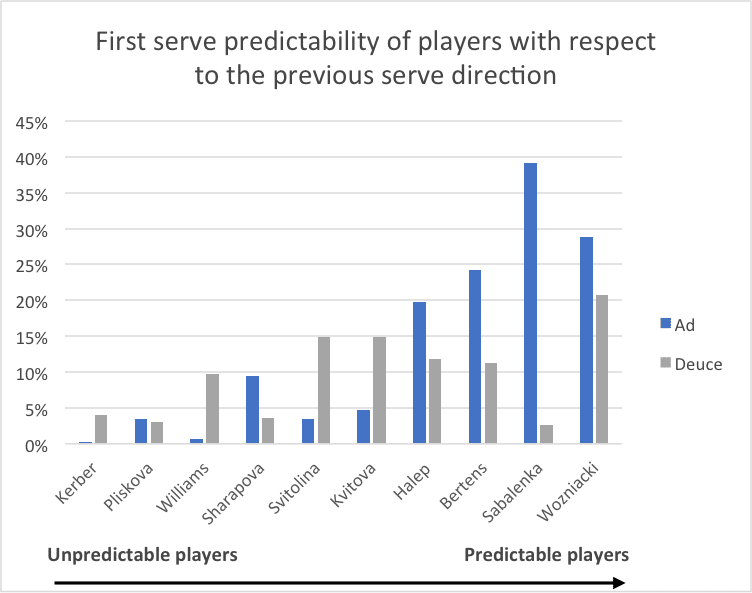 Let’s now consider how winning or losing the previous point affects serve direction—see the second graph. Kerber is the most unpredictable player as she is essentially uninfluenced by whether she won the previous serve or not. Bertens and Wozniack follow suit and are also highly unpredictable. On the other hand, Svitolina, Williams, Kvitova and Sharapova allow their serve behavior to be moderately influenced by previous wins and losses. The most predictable players are Pliskova, Sabalenka and Halep, the latter being particularly predictable in the ad court (29% difference).

These findings indicate that there is potential to detect and exploit serve patterns even in some of the top WTA players. This is in line with extensive prior research (Spiliopoulos, 2012) that being unpredictable, or playing randomly, is quite difficult. While players could learn the patterns in their opponents’ play through experience, this can be a long and difficult process. However, targeted data analytics can significantly speed up this process and uncover other complicated patterns that may be too difficult to be discovered through experience. This requires moving beyond the simple tennis statistics that are currently the focus of the analytics community and using detailed data to search for patterns in players’ behavioural strategies. Furthermore, interpreting the data alone without a theoretical framework to determine the optimal response is not enough. This information coupled with a theoretical analysis is crucial for targeted coaching and strategic planning, so that players can adapt and learn strategies that exploit their opponents’ behavioural patterns.

Spiliopoulos, L. (2018b). The determinants of response time in a repeated constant-sum game: A robust Bayesian hierarchical dual-process model. Cognition, 172, 107-123.