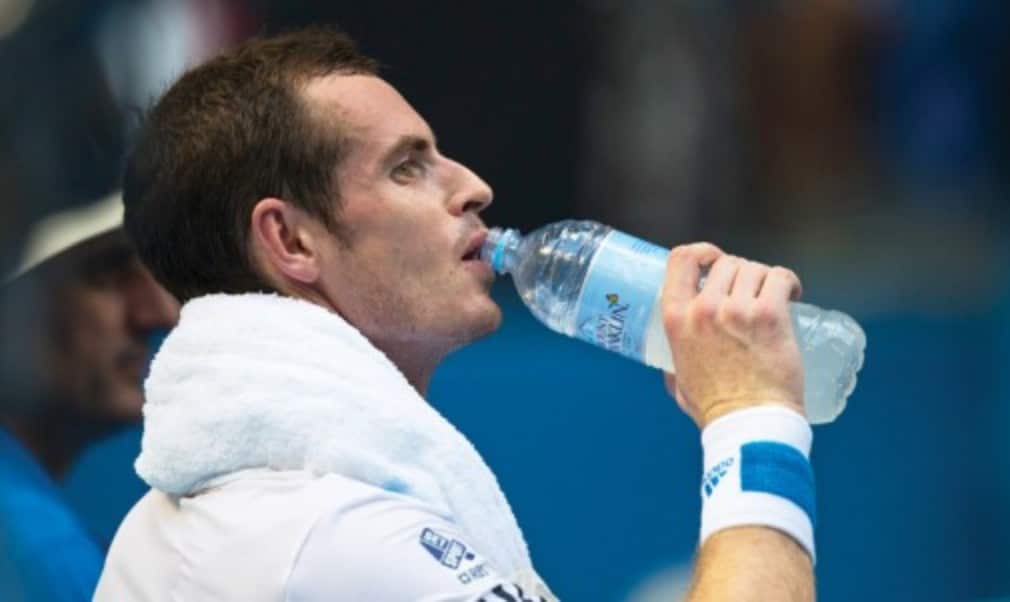 DonÈt Sweat It: The dangers of dehydration

Whether you sweat, perspire or simply glow, it is your body’s way of regulating its temperature.

The hotter you get, the more you will sweat. In order to maintain a safe body temperature (around 37.6_C) the body disperses heat by sweating. Approximately 75 per cent of the energy produced when we exercise is converted to heat and lost.

We are all biochemically individual, so we all sweat at different rates as we exercise. While it has been scientifically proven that men sweat more than women, there are other factors such as environmental temperature, humidity and body size that influence why some people will sweat more excessively and lose more fluids and electrolytes than others during the same intensity workout.

Playing tennis you will lose anywhere between 0.5 and three litres of fluid for each hour of play. Loss of fluids means that blood volume is reduced so it is less efficient at transporting energy and oxygen around the body. As a result, muscles don’t get the energy or the electrolytes they need to keep them firing so your speed and stamina will be impaired. The brain is also affected; your concentration levels will dip and your accuracy and reaction times will suffer. Even more critically, pressure is put on the cardiovascular system to try to pump blood around the body to meet the energy demands.

At some time you will have undoubtedly experienced some of the unpleasant symptoms of dehydration such as muscle cramps, nausea, vomiting or even diarrhoea.

However, if you find that you’ve stopped sweating and your skin is dry or clammy, but your body temperature is still high, then you’re in real trouble. It means that dehydration has reached dangerous levels and the body has to choose between sending fluids to muscles and organs or reducing its temperature by sweating.  The body will divert fluids to the essential organs, meaning that it is unable to maintain temperature regulation. If this happens, you may experience the more serious symptoms of heat stroke, hallucinations, heat exhaustion and even circulatory collapse.

So how do you know if you’re dehydrated? By the time you feel thirsty, you are already dehydrated and may have lost up to two litres of water (equivalent to 1% of your body weight), at which point thermoregulation is already impaired. Don’t leave it until you’re thirsty to start drinking. The best measure of hydration is urine colour.  If it is the colour of straw, your body is well hydrated. However, if it is a dark yellow, this is a sign of dehydration. Do bear in mind, though, that some supplements that contain B vitamins will make urine bright yellow regardless of your hydration levels.

Dehydration can also be calculated by changes in body weight.  A loss of 2% in body weight can give rise to the symptoms of bloating, nausea and vomiting.  If you are playing in hot weather or playing a long match, monitoring weight before and after a match can be a good indicator of your hydration status, which is useful in both rehydrating and for adapting a hydration strategy for future matches. For each kilogram of body weight lost you need to replace approximately 1.2 litres of fluid containing electrolytes.

Electrolytes are the ions that control fluid balance in and around our cells (by osmosis), as well as moderating energy levels and metabolism.

Sodium and chloride are the main electrolytes affected by fluid loss, but other significant ones are potassium, calcium and magnesium.  For each litre of sweat lost we can lose as much as 500-1800 micrograms of sodium and between 700-2100 micrograms of chloride.

Sodium regulates fluid levels outside cells, while potassium moderates fluids inside cells, and magnesium is involved in muscle relaxation and regulating levels of the other electrolytes. Calcium works alongside magnesium to regulate muscle contraction.  However, while magnesium and calcium are closely linked with muscle action, research shows it is low levels of sodium that is most often the cause of heat-induced muscle cramping.

Maintaining electrolyte levels is essential for peak performance, so replenishing those salts during exercise is essential, or symptoms of dehydration are likely to set in.

Drinking plain water throughout a long match could potentially make a bad situation worse.  Drinking water could lead to further sodium depletion, so sports drinks containing electrolytes are a more sensible option. Alternatively, look for supplements (such as Elete, or High5 Zero) that contain a balanced amount of the essential minerals and can be added to water.

Coconut water is a great natural alternative for rehydration. Coconut waters such as Vita Coco contain 40mg of sodium, 66 mg of calcium, 40 mg of magnesium and 740 mg of potassium as well as a good allowance of carbohydrate (around 16.5g).

Your body is made up of more than 50% water, so staying hydrated is crucial, particularly during exercise. In order to maintain peak performance on court, make sure you keep those fluid levels topped up.

This article originally appeared in tennishead Volume 5 Issue 3. Subscribe to the magazine today or download tennishead on iTunes.