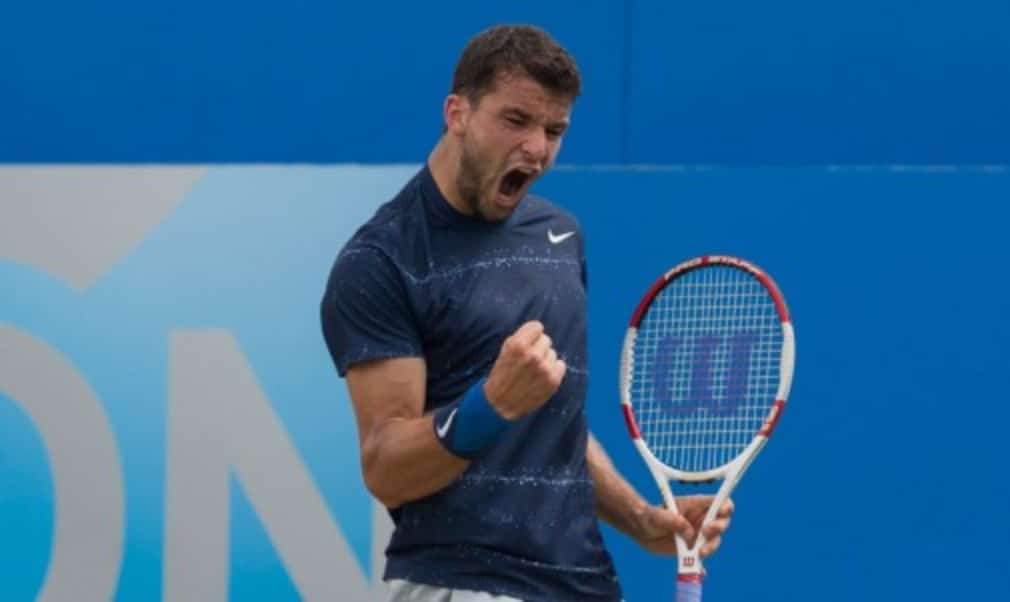 The Bulgarian, who was beaten in straight sets by Ivo Karlovic in Paris, admits he is benefiting from extra time to practise on the grass, having arrived in London over a fortnight ago.

“It’s always a plus spending an extra three, four days and putting those extra hours on the grass early on are really important,” Dimitrov said. “I was really down after the French Open. I didn’t touch a racket for around five or six days.

“It took a lot of courage for me to just come here and grind out there on the grass and find a way to go through every day with the stinging pain from the French Open. It was painful – I was dwelling on it every day. But at the same time that pushed me into those hard sessions on and off the court and eventually that put me in a really good position. I was really positive coming into this week and the next thing I know, I’m in the final.”

In his sixth appearance at The Queen’s Club, Dimitrov will face Feliciano Lopez in the final after the Spaniard defeated Andy Murray's conqueror Radek Stepanek 7-6(7) 6-4.

Dimitrov, who has lifted trophies in Bucharest and Acapulco already this year, is bidding to become the first man this season to win titles on clay, hard courts and grass.

“I always wanted to be in a final out here, stepping on that on Sunday means a lot to me, especially here,” said Dimitrov. “I don't know why I have such a strong intuition about this tournament.  It has always been like one of the biggest events for me.  It's nothing better than to be in the final.”

Standing in the way of Dimitrov and his fourth ATP title will be Lopez, who upset Tomas Berdych on Friday. It will be only the second meeting between the pair – the first coming at Queen’s four years ago, when Lopez won in straight sets. Back then, Dimitrov was ranked No.360 in the world, with Lopez No.31. This time around, it is Dimitrov who will be the higher-ranked player (No.13 v No.29), although Lopez has form on grass – he won the title at Eastbourne last season.

Dimitrov, who had a free pass into the semi-finals after Alexandr Dolgopolov withdrew with a groin injury on Friday, produced an impressive performance against the top seed to claim his seventh win against a top 10 player – and his third this season.  Wawrinka, who had not lost a service game in the tournament, was broken in the fifth game, and the Swiss soon found himself a set down after Dimitrov grabbed a second break to clinch the opening set in half an hour.

After fending off two break points early in the second set, Dimitrov was soon on top in the second set, too, prompting a frustrated Wawrinka to bend his racket in half as the 23-year-old closed in on victory. However, despite being beaten in 62 minutes, the world No.3 could see plenty of positives ahead of Wimbledon.

“I think so far it's been a positive week except today,” said Wawrinka.  “I was playing well.  I'm really happy with the practice session that I did every day.  I had a lot of time on the grass, so it's been really good for the preparation for Wimbledon.

“I can still improve, for sure.  I have time for Wimbledon to get ready.  I need to do more hours on the practice court, more exercise with Magnus. In general, I feel OK.  I'm sure I'm going to be ready for Wimbledon, and I'm sure if I can start well the tournament I will have some chance to do it really well.”