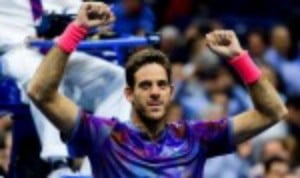 After 37 previous battles, the first ever duel between the Spaniard and the Swiss in New York had been pencilled in for Friday, however a certain Argentinian decided to rip up the script.

Juan Martin del Potro, despite struggling with a heavy cold, ended Federer’s 18-match winning streak at Grand Slam level as he scored an impressive 7-5 3-6 7-6(8) 6-4 win to reach the semi-finals of a major for the first time in four years.

A heavyweight contest between two Grand Slam champions was predicted. In truth, the match never hit the heights expected but the third set tiebreak is unlikely to be forgotten any time soon.

Federer saw four set-points slip by in the shootout as his pertinacious opponent refused to surrender. del Potro eventually nicked it by ten points to eight and the guttural roar he unleashed afterwards suggested he knew victory was within his grasp.

The buoyant Argentinian served beautifully in the fourth set, and a single break acquired in the fifth game was all he needed to set up a showdown with Nadal.

“I played my best match of the tournament,” said a delighted del Potro afterwards. “I did everything well, I served so well, I hit my forehand as hard as I can and I think we played a great match. I think I deserved to win in the end.

“I got a little lucky [in the third set tiebreak] because at 6-6, I hit a double-fault and that can’t happen against Federer. In the end, I got lucky. I made some good returns and in the fourth set I played even better.”

Despite the fervent atmosphere, the match began slowly. Both players were resolute behind their serves and the rallies were brief, but often untidy. Federer looked especially shaky and his usually formidable forehand was the source of much of his angst.

At five apiece, a double-fault from the Swiss gave his rival an opportunity to break and he gleefully took it. del Potro fizzed a forehand passing-shot beyond the sprawling Swiss and he claimed the opening stanza moments later.

In the first set, Federer had been insecure from the baseline however the mishits and miscues were less frequent in the next. The 36-year-old elevated his game and he soon achieved parity on the scoreboard.

Breaks of serve were traded in the third set before a tiebreak was called into action. Federer kept nudging ahead but he failed to convert any of four set-point chances and paid a heavy price.

The Swiss will rue the fact he ended up losing the set from such a commanding position, but he did little wrong. The Argentinian simply played the big points well and he somehow wrestled the set from his flummoxed rival.

The fourth set galloped along at pace as both players rattled through service holds, however Federer encountered difficultly in the fifth game. He appeared to have averted danger when he reached deuce after being 15-40 down, but a fluffed overhead and a sublime backhand pass from the Argentinian saw him slip 3-2 behind.

With a break in his pocket, del Potro was an unstoppable force and he eased over the finishing line to secure a famous victory at his favourite Grand Slam haunt.