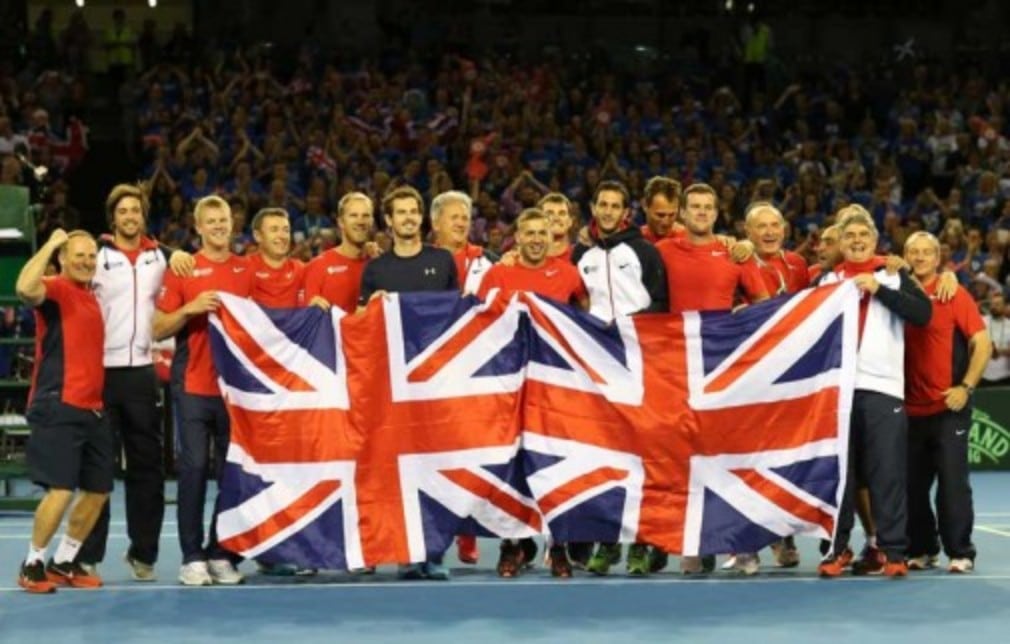 Great Britain are through to the final of the Davis Cup for the first time in 37 years thanks to another remarkable performance by Andy Murray. Playing his third rubber in three days, the 28-year-old Scot beat Bernard Tomic 7-5, 6-3, 6-2 with a performance full of pride and passion in front of 8,000 noisy supporters in Glasgow’s Emirates Arena to send Britain into a final away to Belgium beginning on 27 November.

It was an appropriate end to what had been a memorable weekend. Murray is adored by the Scottish sporting public and the fans who packed the arena each day all but blew the roof off with their raucous support.  “You’re not only playing against Andy Murray,” Tomic said after his defeat. “It feels like you’re playing the whole of Britain.”

Murray, who had won his opening singles rubber and partnered his brother Jamie to a thrilling victory in an epic doubles on the second day, played like a man with a mission. “We owe Andy a lot for what he brings to the team, ”Leon Smith, Britain’s captain, said afterwards. “His commitment to the team has just been absolutely incredible.”

The only regret for Smith and his men will be that they will not play a fourth successive Davis Cup tie on home soil. Belgium, who beat Argentina in the other semi-final, will have home advantage and the choice of playing surface.

According to some reports they are hoping to stage the final in Ghent, perhaps on an indoor clay court. Clay has always been Murray’s most challenging surface, but with the world No 3 in their line-up Britain would still start the final as favourites as they attempt to win the competition for the first time since 1936. It will be Britain’s first final since they lost away to the United States in 1978.

Thanasi Kokkinakis beat Dan Evans 7-5, 6-4 in Sunday’s final dead rubber, but the only result that mattered was Murray’s victory earlier in the day. It was his 17th victory in 17 tour-level singles matches against Australian opponents and he achieved it despite having to cope with a back problem, which he later revealed had been troubling him throughout the weekend.

Murray said it was not related to the surgery he underwent two years ago. He thought it had probably been caused by his muscles stiffening up after he took a few days off following his exit from the US Open.

"On Tuesday night once I’d finished practising and cooled down, my back was extremely sore,” Murray said. “Then it got progressively worse in the next couple of days.”

Murray’s back problems had seen him get off to a slow start in Saturday’s doubles, but he was quickly into his stride against Tomic. Although he failed to serve out for the first set at 5-3, it was the only time in the match when he looked in any sort of difficulty. He soon broke Tomic again to take the opening set, completing the job with a superb drop shot.

Tomic’s challenge faded quickly after he was broken in the fourth game of the second set. Murray was soon two sets up and broke again in the third game of the third set as Tomic made a series of errors. Murray broke again to go 5-2 up before converting his first match point in the following game.

Murray looked so drained at the end that he seemed barely able to join in the celebrations. He embraced Smith, acknowledged the congratulations of the rest of the British camp and waved to the crowd before sitting in his chair, apparently exhausted.

The world No 3 said that Belgium would be tough opponents. “Belgium have a player in David Goffin who is very close to being in the top 10 of the world and it’s possible he could be by then, Murray said. “Playing at home they will put him on a surface that gives him the best chance. So there are no guarantees, but reaching the final is a big achievement and something that hasn't been done for a long time. Everyone in the team should be very proud of that.”

By beating the United States, France and Australia, Britain became the first country to defeat the three other Grand Slam nations in consecutive Davis Cup ties since 1933.