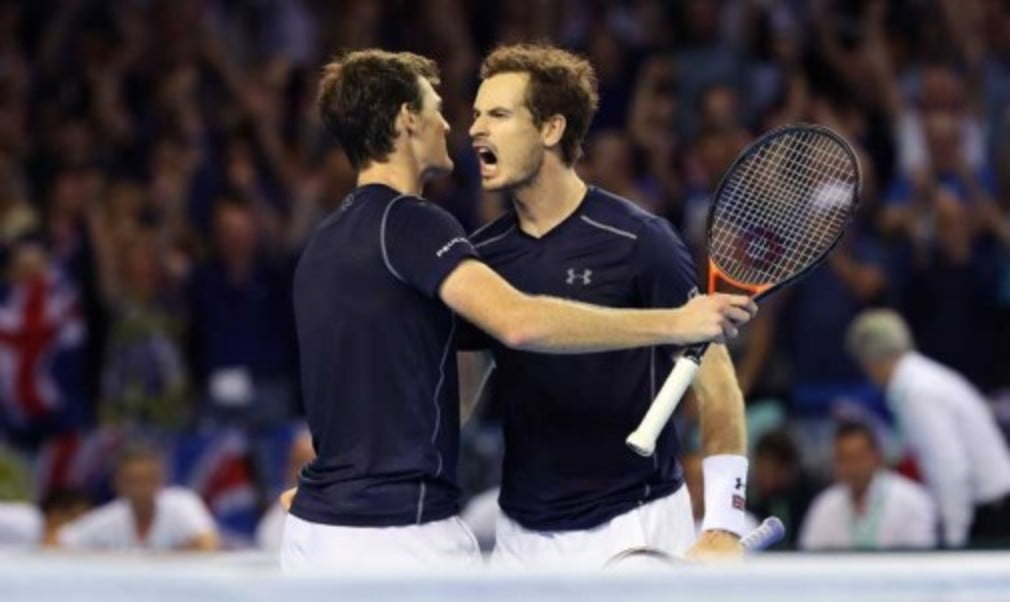 The defending champions kept alive their chances of reaching the final for the second year in a row when Andy and Jamie Murray won Saturday’s doubles, beating Juan Martin del Potro and Leonardo Mayer 61 36 64 64. The brothers’ victory left Argentina with a 2-1 lead going into the final day, meaning that Britain will have to win both of Sunday’s reverse singles to go through to the final in November against France or Croatia.

Andy Murray, despite having spent more than eight hours on court in the first two days, will be the favourite to beat Guido Pella in the first of the reverse singles. If the world No 2 wins, the tie will go down to a deciding fifth rubber, for which both Smith and his Argentinian counterpart, Daniel Orsanic, have vital decisions to make.

Del Potro is scheduled to take on Kyle Edmund in the fifth rubber, but the captains can change their line- up. After Edmund’s defeat to Pella on the opening day Smith may be tempted to call up Dan Evans, who has twice won deciding fifth rubbers for Britain during Smith’s reign as captain.

One of those wins came in 2013, when Evans beat Russia’s Evegny Donskoy at the Ricoh Arena in Coventry. That was one of only two occasions in Davis Cup history when Britain have won a tie after trailing 2-0. The other occasion was in 1930, when Bunny Austin led a fightback against Germany at Queen’s Club.

Orsanic’s decision will be based largely on the fitness of Del Potro, who, like Andy Murray, has already played for eight hours this weekend. Del Potro said after his doubles defeat that every part of his body was aching, but his greatest concern is likely to be his left wrist. Argentina’ s talisman has made a remarkable comeback this summer following his third wrist operation, but had not envisaged as demanding a weekend as this one when he mapped out his schedule for the year.

If Del Potro does not play, Argentina would turn to either Federico Delbonis, who has yet to play in the tie, or Mayer, who has dropped out of the world’s top 100. In such a scenario questions would surely be asked of Orsanic, who changed his original doubles line-up to accommodate Del Potro in the hope that his team could clinch victory on the second day.

Andy Murray has had just as demanding a weekend as Del Potro, but is ready for one last push against Pella. “I’ll give it my best effort,” he said. “I am not going to be the fresher of the players going into the match. I will be tired. I have to accept that and deal with it.”

Although there were times in the opening two sets of the doubles when Murray did not look as sharp as usual, by the end of the match he was firing on all cylinders. His performance dovetailed perfectly with that of his brother, who was the dominant figure at the start, particularly at the net, but missed some key shots in the latter stages.

The brothers got off to a flyer, winning the first five games and taking the opening set in just 26 minutes. However, the Argentinians responded in spirited fashion in the second set which they took with a single break of serve after Andy Murray’s worst serving game of the match as the Wimbledon champion made two double faults.

When the brothers failed to convert some early break points in the third set and Andy Murray dropped serve again in the seventh game it seemed that the momentum might have shifted decisively in favour of the Argentinians.

However, nobody relishes a fight quite like Andy Murray, who gritted his teeth and hit top form as the home pair broke Mayer to level at 4-4. Two games later they took the set by breaking Del Potro’s serve, Andy Murray delivering the killer blow with a thumping return of serve.

While Del Potro had looked solid throughout, Mayer was Argentina’s weaker link in the closing stages. The world No 114 had saved one break point in the second game of the fourth set and at 4-5 it fell to him to serve to stay in the match.

The Murrays peppered Mayer with some big shots to win the opening point and when Jamie Murray hit winning volleys on the next two, the stage was set for his brother to secure a famous victory. As Andy Murray hit the winning volley, the crowd erupted in celebration of a victory that was well and truly made in Scotland.

“It was brilliant,” Jamie Murray said afterwards. “From the first point to the last the crowd was something else. It’s a huge privilege to be able to play with Andy in Scotland and have that amount of support behind us. We played a great match. We had to.

“We knew that they weren’t going to shy away from the occasion, the atmosphere, and I think we should be really proud of the way we played and competed from start to finish. It gives us some momentum back in the tie going into tomorrow’s matches.”

Andy Murray paid tribute to his brother.“He made a lot of returns throughout the whole match, made them work hard the whole time,” he said. “When I struggled at the end of the second and beginning of the third set he stayed on it and that was great. It wasn't really until the middle of the third and fourth set that I started to play well, returning very well and volleying better. It was a tough period but we stayed strong together.”