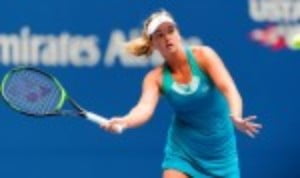 Coco’s on the move

The American won 7-5 4-6 6-4 to earn a fourth-round showdown with Lucie Safarova.

Vandeweghe, who was born in New York, has reached the Wimbledon quarter-finals on two occasions and played in one Australian Open semi-final, but until now, the world No.22 had rarely performed at her best in Flushing Meadows.

Under Pat Cash’s guidance, however, Vandeweghe has enjoyed a good summer. She reached the last eight at Wimbledon and made the final in Stanford, where she lost to Madison Keys.

Victories over Alison Riske and Ons Jabeur took her into what looked likely to be a tricky third-round encounter with Radwanska, who had won her first two matches in straight sets.

The momentum shifted one way and then the other in the opening set. Radwanska went 3-0 up before Vandeweghe won five games in a row. Radwanska levelled at 5-5 only to drop serve in the following game and it cost her the set.

The opening set took 64 minutes to complete and the second was equally tight. It went with serve until Vandeweghe stepped up to the line at 4-5. The American led 40-15 but then committed two double-faults, after which Radwanska won the next two points to level the match.

Vandeweghe got off to a good start in the decider – winning the first two games – but Radwanska broke back immediately. The match was perfectly poised when the Pole served at 3-3, but the seventh game, which featured four deuces, proved to be the turning point.

Radwanska saved two break-points, but on the third, Vandeweghe cracked a forehand winner. When the American served for the match at 5-4, she encountered trouble but ultimately prevailed.