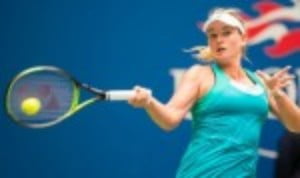 But the hardworking 25 year old has also been competing in the women’s and mixed-doubles events.

The American lost in the first round of the women’s doubles alongside playing partner Shelby Rogers however she is through to the semi-finals of the mixed event with Horia Tecau.

Vandeweghe is no stranger to the team game and she was a mixed-doubles finalist at the US Open last year with Rajeev Ram and also reached the championship match in Australia with Mahesh Bhupathi.

But this year, her third season in the Top 40, she has established herself as a singles player. She was able to put in the hard yards in the off-season and reached the semi-finals of the Australian Open before making the last eight at Wimbledon.

An advocate of legendary basketball coach John Wooden, she quotes the ‘Pyramid of Success’, where players start at the bottom, build the platform for success and then put themselves to the test.

“As good as practice is, it can put doubt into different things that are going on because you need to prove it to yourself, at least for me, out on the match court,” said the American.

The ultimate test will come when she faces Pliskova.

“If you are so in awe of someone being No. 1 in the world, then I don't think you're going into a match focused and ready to go,” she said.

The last time the pair met was in Stuttgart earlier this year when the Czech won in straight sets. But Vandeweghe will have done her homework with coach Pat Cash, because as she said, it’s often the little things that matter.

“My grandfather was always very particular on using the ‘Pyramid of Success.’ To start from just putting your socks on correctly without any bumps, because that gives you blisters. As a kid you don't care. You just want to go and play and get started. Even though your friends are already out there shooting or kicking the soccer ball or whatever, it was more about getting the little things right.”