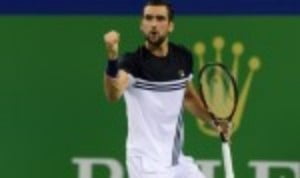 Cilic too strong for Edmund

It was a comfortable 6-3 7-6(5) success for the Croatian and he did not drop serve once in the 97-minute contest. The No.4 seed will encounter either Di Wu or Steve Johnson in the last sixteen on Thursday.

Edmund, who dropped serve in the opening game, was always playing catch-up and he will be particularly frustrated with the manner in which he tamely squandered three break-point chances.

Elsewhere in the second round, Fabio Fognini was outstanding in a 7-6(7) 6-3 win over Lucas Pouille. The inimitable Italian cracked 30 winners and committed just 13 unforced-errors as he overcame his floundering opponent.

Pablo Carreno Busta’s bid to qualify for the World Tour Finals in London suffered a blow after he was bundled out the competition by Albert Ramos-Vinolas in straight sets.

Juan Martin del Potro did not face a single break-point as he brushed past Andrey Rublev 6-3 6-4 and Richard Gasquet produced a stirring fight back to squeeze beyond Hyeon Chung 3-6 6-4 6-3.

In the remaining first round matches, Sam Querrey returned to winning ways after a disappointing early exit in Tokyo. The big-serving American was a 6-3 6-2 winner over Yuichi Sugita in just 52 minutes.