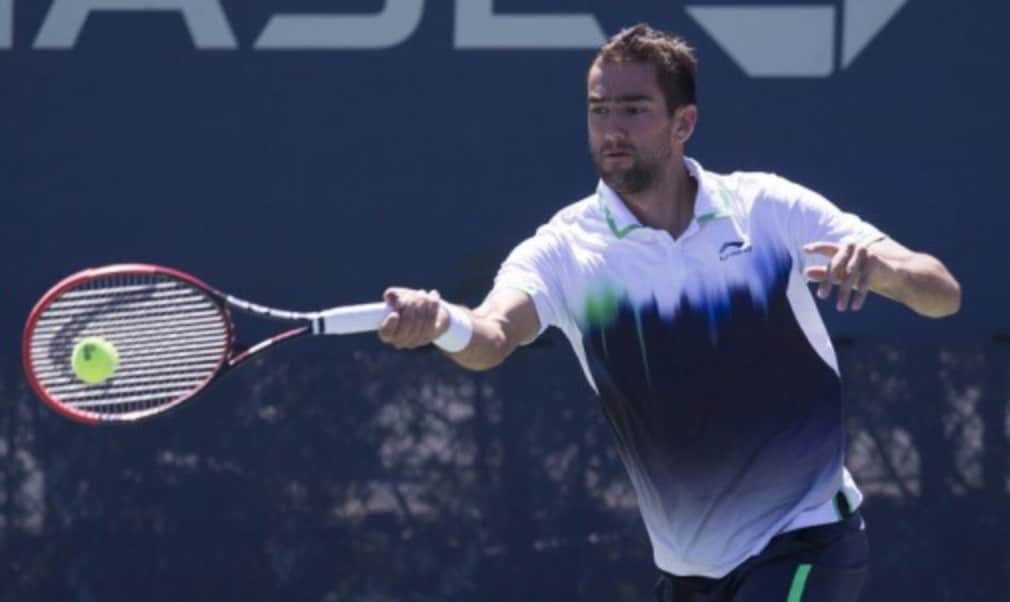 Cilic and Nishikori set up shock US Open final

Marin Cilic produced one of the performances of this US Open to stun Roger Federer and reach his first Grand Slam final with a 6-3 6-4 6-4 win.

The Croatian’s first serve was all but unplayable throughout the one-hour, 45-minute contest, but it was the Cilic return that truly undid Federer, whose bid for a sixth US Open crown was dashed having fought back from match point down against Gael Monfils in the quarter-finals.

Cilic broke early in the first and second sets and recovered an early Federer break in the third before booking his spot in the final in style, firing three aces and a backhand winner to serve out the win to love.

“Amazing day for me, I feel amazing," Cilic said on-court after the match. "To be able to play like this I never dreamed of – I think this was the best performance of my career."

Cilic had previously reached the semi-finals at the Australian Open in 2010. He missed last summer’s US Open while serving a doping ban after inadvertently ingesting the banned stimulant nikethamide.

Since then, his work with former Wimbledon champion Goran Ivanisevic has strengthened his serve and tightened his overall game, as Federer found to his cost on Saturday.

“It's fairly simple: I think Marin played great,” Federer admitted. “I maybe didn't catch my best day, but I think that was pretty much it in a nutshell.”

Cilic will face Kei Nishikori in Monday’s final after the No.10 seed made history by becoming the first Asian man to reach a singles Grand Slam final.

The Japanese 24-year-old produced the day’s first shock result by beating world No.1 Novak Djokovic 6-4 1-6 7-6(4) 6-3 in sweltering conditions before the rain came.

Djokovic was bidding to reach his fifth consecutive US Open final but began piling on the errors after running away with the second set.

Nishikori, who had spent more than three and a half hours longer on court than the Serbian in reaching the semi-finals – including four-hour five-set wins over Milos Raonic and Stan Wawrinka – showed little sign of fatigue as he met fire with fire from the baseline.

Djokovic produced some sparkling moments, including a string of unplayable backhand drop-shots, but Nishikori won the points that mattered, producing a slew of passing shots as the world No.1 ventured forward.

A tired forehand from the Serbian gave up a break at the start of the fourth set, and after saving three break-back points in the next game Nishikori moved clear, breaking to seal victory in two hours, 52 minutes.

"I was a little bit tight, especially with it being my first semi-final in a grand slam. It's just an amazing feeling beating the number one player. They were tough conditions today. I guessed I would have to play a long match and hopefully I can recover well for the final," Nishikori said.

"He started to play much better after the first set, more aggressive, but I tried to forget about the second set and focus again. [Coach] Michael Chang has been helping me a lot, he is the reason I'm here. I hope it's big news in Japan. I feel the support from Japan, even on the TV."

Makarova and Vesnina fight back to deny Hingis and Pennetta

Ekaterina Makarova capped a fine US Open with a doubles title alongside Russian compatriot Elena Vesnina, recovering from a set down to beat Flavia Pennetta and former world No.1 Martina Hingis 2-6 6-3 6-2.

Makarova reached her first Grand Slam singles semi-final in New York, and was able to put the disappointment of her 6-1 6-3 defeat by Serena Williams behind her to win her second doubles titles with Vesnina.

"Definitely, it was so amazing," Makarova said. "I'm just so happy. It was a great two weeks for me."

Hingis, playing her first Grand Slam final since 2002, was magnanimous in defeat despite coming so close to adding to the nine Grand Slam doubles titles she claimed before retiring.

“To watch him playing against probably the best player ever and giving him a tennis lesson, it's unbelievable … three aces in a row is just beautiful. Just beautiful. It's just like watching myself."

An emotional Goran Ivanisevic was bursting with pride after Marin Cilic went one round better than he did in New York and reached the US Open final.

38 – The number of consecutive Grand Slam finals to feature either Roger Federer, Rafael Nadal or Novak Djokovic, dating back to the 2005 Australian Open, won by Marat Safin against Lleyton Hewitt.

Cilic versus Nishikori is the first Grand Slam final to feature two debutants since Nadal won his first French Open crown against Mariano Puerta, also in 2005.