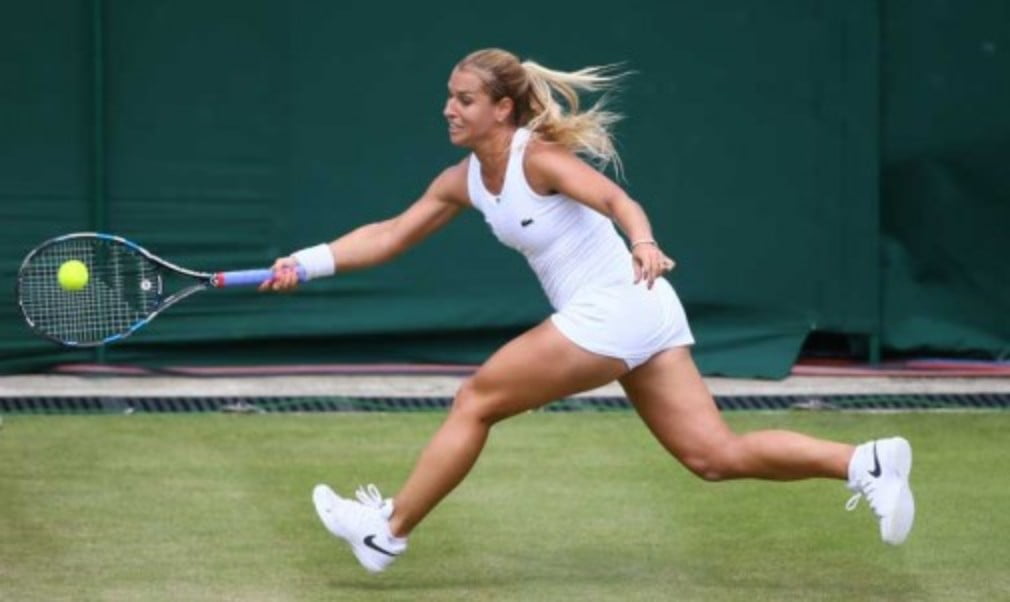 The former Australian Open runner-up is due to get married at home in Bratislava on Saturday, but says she will push the date back if she reaches the semi-finals.

“We chose this [date] because I never saw myself as such a great grass court player,” said Cibulkova, who also reached the quarter-finals at the All England Club in 2011. “But winning Eastbourne and now being in the quarter-finals I would change my mind.

“If we would really have to postpone it, then it will be like a dream come true because nothing better could happen to me in my tennis career. It’s no problem to postpone the wedding [by] one week, and it will be even more enjoyable.”

Cibulkova was speaking after coming through a marathon three-hour match against No.3 seed Agnieszka Radwanska in the fourth round on Monday, winning 6-3 5-7 9-7 to reach the last eight. She will now face the unseeded Russian Elena Vesnina, who beat close friend and doubles partner Ekaterina Makarova to reach the quarter-finals.

Serena Williams (USA) [1] v Anastasia Pavlyuchenkova (RUS) [21]
Through to an eighth consecutive Grand Slam quarter-final and a 45th overall, six-time Wimbledon champion Serena Williams is still chasing Steffi Graf’s Open era record of 22 Grand Slams, and has been for the last 51 weeks. Runner-up at the Australian Open and Roland Garros, the American has a determined look on her face this week as she saw off long-time rival Svetlana Kuznetsova in straight sets on Monday. Next up is another Russian in the shape of world No.23 Pavlyuchenkova, who is through to her first Grand Slam quarter-final since 2011. The former junior world No.1 has never previously made it past the third round at Wimbledon but was impressive in her straight sets fourth round win over Coco Vandeweghe.
Prediction: Williams in two

Dominika Cibulkova (SVK) [19] v Elena Vesnina (RUS)
Former Australian Open runner-up Dominika Cibulkova is unbeaten on the grass this summer after reaching her second Wimbledon quarter-final. The Slovakian No.19 seed, who has seen off two former finalists – Eugenie Bouchard and Radwanska is on a nine-match winning streak on grass after winning the Aegon International title in Eastbourne. She hit 38 winners in her fourth-round win over Radwanska, but will she still be feeling the effects of the three-hour battle, which she described as the toughest match of her career, when she takes to the court against Vesnina on Tuesday?
Prediction: Cibulkova in two

Simona Halep (ROU) [5] v Angelique Kerber (GER) [4]
Two players who have struggled for consistent results in 2016, both are playing in their sixth Grand Slam quarter-final and looking to reach a fourth major semi-final. 2014 Roland Garros runner-up Simona Halep is through to her first major quarter-final of the season after snapping a year-long trophy drought in Madrid in May. Australian Open champion Kerber, meanwhile, has bounced back from a first-round exit at Roland Garros to reach a third Wimbledon quarter-final and is yet to drop a set at SW19. Halep, who beat a German opponent in the quarter-finals here two years ago (Sabine Lisicki), showed impressive poise to come from behind to beat Madison Keys in the fourth round. She has won three of their previous four matches, although 2012 semi-finalist Kerber won their only meeting this season.
Prediction: Kerber in three

Venus Williams (USA) [8] v Yaroslava Shvedova (KAZ)
Five-time champion Venus Williams is through to her first Wimbledon quarter-final six years, and is well placed to go one step further against the unseeded Kazakh Shvedova, who has never reached a Grand Slam semi-final. Williams was given a scare in the earlier rounds against Greek qualifier Maria Sakkari and young Russian Daria Gavrilova, but got the job done in straight sets in the fourth round, although she had to come from a break down to beat Carla Suarez Navarro.  Shvedova, who was 12-15 for the season before arriving at Wimbledon has made quiet progress through to the last eight, taking out two seeded players in Elina Svitolina and Lucie Safarova as well as former Wimbledon finalist Sabine Lisicki.
Prediction: Venus in three