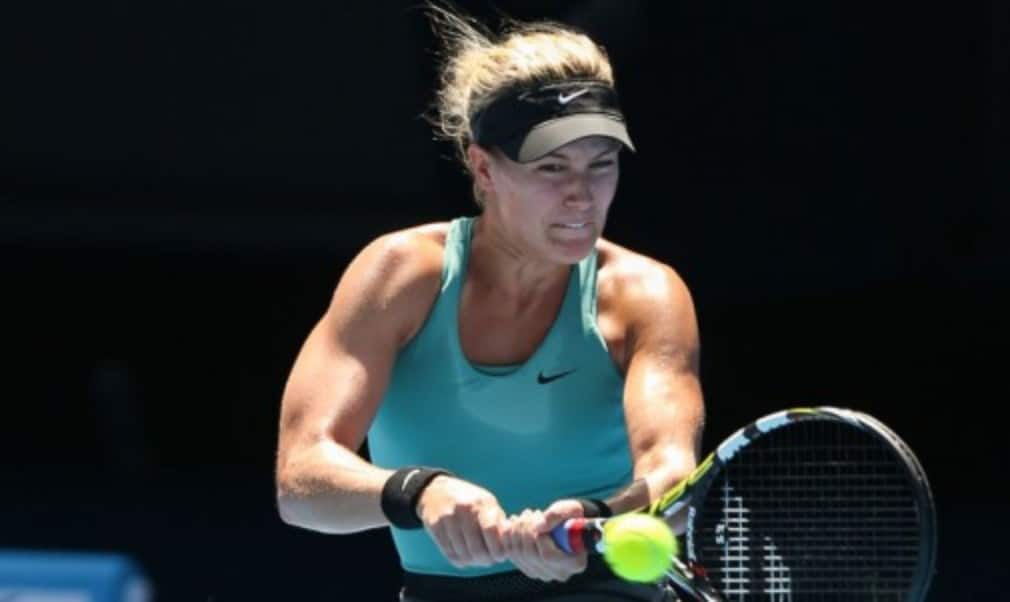 Blow-out or grind-out, take the wins as they come. That was the message from Eugenie Bouchard and Sam Stosur, who were both happy with their contrasting days at the office as they set up a standout second-round clash at the Connecticut Open.

Stosur earned her first win in New Haven the hard way, digging in after dropping match points in the second set to see off Kurumi Nara 7-6(5) 6-7(10) 6-2. The Japanese world No.32 has been enjoying a strong summer on the hard courts and gave Stosur plenty of problems before the former US Open champion broke clear in the final set.

“She’s one of those players who makes you think smart about what you’re doing, because if you don’t do the right thing she can hit it back just as hard,” admitted Stosur, who turned to high-bouncing heavy spin to disarm her 5’1” opponent and took the positives from a tough first round encounter.

“If you can win every match and not be tested, that’s fantastic – but that doesn’t really happen in this world,” she added. “Anytime you can battle through a match like that it is good for your confidence, your belief. You can’t work on those things in practice – that only happens in matches.”

Bouchard has been enduring her own grind away from the court. Niggling thigh and knee injuries have cut short her US Open preparations, playing a part in her three consecutive losses since the Wimbledon final – a streak she broke in some style against Bojana Jovanovski, who was blown away 6-1 6-1 in 53 minutes.

“I was happy to play solid, keep my level up for the whole match, and to get a win – my first win since Wimbledon,” Bouchard admitted. “I want to keep the momentum going.”

The Canadian world No.8 warmed up five times while waiting for Stosur to see off Nara, but was glad to be showing signs of recovery following a gruelling European season just in time for New York.

“Trying to play matches this week, that’s important for me,” she said, admitting she does not yet feel 100% fit. “It’s a work in progress – I can still play, but I’m always one to want to play, so that’s what I do.”

Both Bouchard and Stosur expect a battle in the second round after their hard-fought final in Osaka last season went the Australian’s way.

“She plays really aggressive, she holds the baseline well, competes well,” Stosur said. “It’s certainly not going to be an easy match for me. Putting consistent results together, especially at the Grand Slams – two semis and a final – she’s obviously doing something right.”

Bouchard has a clear plan for the world No.25. “I know she’ll try to control with her serve and forehand and I’m going to look to try and take it early and control the point, like I did today.”

Stosur did not lay claim to the day’s longest match. That honour went to Barbora Zahlavova Strycova, who broke the three-hour barrier before dismissing Swiss qualifier Belinda Bencic 6-4 5-7 6-3.

She will face Caroline Garcia, who got the chance to exact swift revenge against Irina Camelia Begu just a day after the Romanian beat her in the final qualifying round on Sunday. The Frenchwoman was added to the draw as a lucky loser, reuniting her with Begu. This time Garcia emerged victorious, winning 7-6(4) 7-6(4).

Four-time former champion Caroline Wozniacki rallied from a sluggish start to beat Timea Bacsinszky 4-6 6-1 6-2 to set up a second round showdown with Camila Giorgi, a 6-3 6-1 winner over CoCo Vandeweghe.

“There isn’t really going to be much thinking out there, there’s just going to be a lot of reaction,” Wozniacki said. “She hits the ball really and goes for every shot, so it’s going to be all about just being ready and trying to stay aggressive with her.”

Magdalena Rybarikova set up a meeting with top seed Simona Halep with a 6-4 6-3 win against Silvia Soler-Espinosa, while Garbine Muguruza will face Peng Shuai after ousting No.7 seed Sara Errani, her fifth top-20 victim in 2014.

Kirsten Flipkens was taken the distance before dispatching Misaki Doi 6-3 4-6 6-2 to set up a meeting with fellow wildcard Andrea Petkovic, who battled past Dominika Cibulkova 7-6(2) 6-3 in the day’s final action.