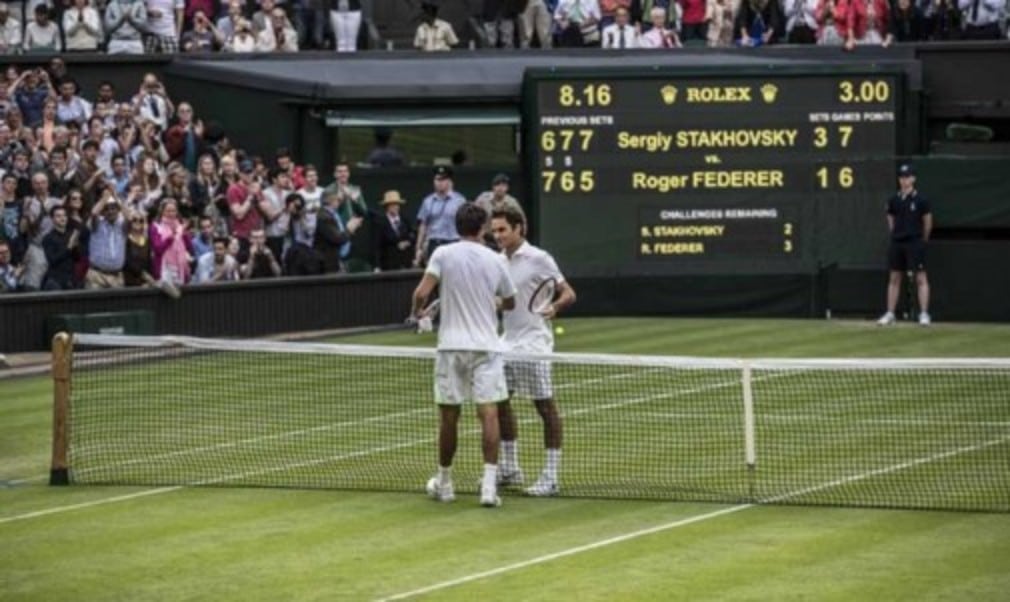 Since 2002 only two men had beaten Federer at Wimbledon apart from Nadal, but both had been ranked inside the top 10 in the world. The Ukrainian was ranked 116th when he stunned the reigning champion on the first Wednesday evening to end the Swiss’ run of successive quarter-final appearances at Grand Slams, which dated back to the 2004 French Open. Stakhovsky’s stay in the draw lasted two more days, but his victory over the seven-time champion will be forever etched in Wimbledon folklore.

Pete Doohan (AUS) beat Boris Becker (GER)
7-6(5) 4-6 6-2 6-4
1987, Second Round
Doohan earned the nickname ‘The Becker Wrecker’ in his native Australia for defeating the two-time defending champion, still only 19 at the time. The win was however the pinnacle of the southern hemisphere players’ career. He achieved a ranking high of 43 and his foray in the 1987 Wimbledon draw lasted just two more rounds after defeat to Slobodan _ivojinovióö. Becker would return to claim his third and final Wimbledon in 1989 and was gracious in defeat in 1987: “I knew the day had to come when I would lose. I am not immortal.”

Since making the final in 2011, Nadal has failed to make it past round four, and defeats to lesser ranked players on the lawns of SW19 have become almost commonplace. But this was the first, the one that shook the tennis world and made the Spaniard look genuinely more vulnerable than ever before in the early rounds of future slams. The World no 100 served heavy and swung freely to knock the two-time champion out under the Centre Court roof. He lost a round later to Phillipp Kohlschreiber.

Ivo Karlovic (CRO) beat Lleyton Hewitt (AUS)
1-6 7-6(5) 6-3 6-4
2003, First Round
Hewitt became the first defending champion to go out in the first round in the open era. Karlovic’s debut on Centre Court was only his 11th match at Tour level, but the occasion did not stop him firing down 18 aces on the way to securing victory in just short of two and a half hours. And all of this after a one-sided first set which only pointed at a routine win for the previous year’s champion. The 6ft 11in Croat won one more match that year before losing to Max Mirnyi in round three.

Roger Federer (SUI) beat Pete Sampras (USA)
7-6(7) 5-7 6-4 6-7(2) 7-5
2001, Fourth Round
The match which in hindsight closed one door and opened another in the history of men’s tennis. Federer announced himself on the grandest of stages by taking out the defending champion by beating him at his own game- a serve a volley masterclass mixed in with pinpoint accuracy from the baseline. Sampras never recovered and would go on to lose in the first week twelve months later. Federer, installed as favourite that fortnight in wake of this victory, fell to Tim Henman two days later in the Quarter-Final.

Goran Ivanisevic (CRO) beat Pat Rafter (AUS)
6-3 3-6 6-3 2-6 9-7
2001, Final
Twelve previous Wimbledon showings had yielded three final losses for the Croat, who went into the 2001 championships as a Wildcard. Rafter was seeded third and looking to add to his two US Opens having pushed Sampras all the way at SW19 a year earlier. On a cloudy third Monday (the last time the Championships needed an extra day to finish) Ivanisevic realised his dream after five sets and three hours, becoming the first wildcard to lift the trophy in tournament history. He did not return to defend his title in 2002.

George Bastl (SUI) beat Pete Sampras (USA)
6-3 6-2 4-6 3-6 6-4
2002, Second Round
Sampras lost out to a Swiss for the second year in succession, but the ramifications this time around were even bigger. The American’s five set defeat to the man ranked 145 in the world would be his last ever at Wimbledon, and it was perhaps fitting that it came on Court 2, then aptly known as the graveyard of the seeds. Bastl never got near the front page of the papers again and his time in the limelight lasted just one more round, when he was beaten by eventual finalist David Nalbandian.