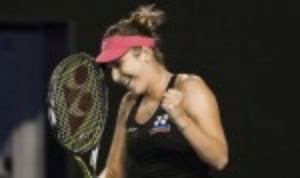 The 18-year-old lost 6-4 6-3 to Roberta Vinci in the St Petersburg Ladies Trophy final but climbed to No.9 in the WTA rankings – the first teenager in the top 10 since Caroline Wozniacki in July 2010.

“As a small kid, everyone is dreaming to one day become Top 10,” Bencic said after her semi-final win over former junior rival Daria Kasatkina. “And now I realize that all the hard work paid off. Until now, I didn’t know if I would make it. But this is an amazing moment for me and my dream. My goal is reached.

“Now my next goals are just to keep climbing up, to keep winning matches and still to enjoy it."

A year ago Bencic was ranked No.37 but enjoyed a remarkable rise in 2015, winning her first title in Eastbourne before winning the Rogers Cup trophy in Toronto, beating four Top 10 opponents – including No.1 Serena Williams and No.2 Simona Halep – on the way.

She had the opportunity to break the top 10 in September last year after beating Wozniacki in Tokyo, but defeat to Agnieszka Radwanska in the final saw her finish the year at No.14