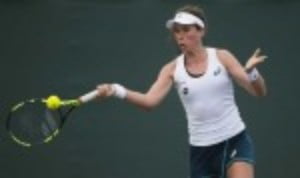 Azarenka remained on course for a third Miami Open title with a 6-4 6-2 victory at Crandon Park and set up a rematch with Australian Open champion Angelique Kerber – the only player to beat her in 2016 so far.

For Konta, it has been a year of milestones. In Melbourne she became the first British woman to reach the semi-finals of a Grand Slam since 1983, and subsequently broke into the top 30 to become the highest ranked British woman since Jo Durie in 1987.

After a fourth-round defeat to Karolina Pliskova in Indian Wells, Konta achieved another first in Miami as she became the first British woman to reach the quarter-finals at Crandon Park.

To put her progress into perspective, a year ago Konta was ranked No.151 in the world, and lost in qualifying in Indian Wells. She then headed to Jackson in Mississippi to play an ITF $25,000 event on clay, pocketing $2,091 for reaching the final. Twelve months on she will take home $112,270 from her run to the quarter-finals in Miami.

Konta can already boast wins over the likes of Venus Williams, Simona Halep and Garbine Muguruza and is closing in on the world’s Top 20, having already overtaken former world No.1s Caroline Wozniacki and Jelena Jankovic.

She can also claim a career win over Azarenka – having won the first set before the Belarusian retired from their second-round match in Wuhan – but the player she faced on Stadium Court on Wednesday was a very different beast.

Azarenka, who is bidding to become only the third woman to win back-to-back titles in Indian Wells and Miami, appears to be back to the form that helped her win two Australian Open titles before a series of foot injuries saw her slip down the rankings.

The world No.8 – back in the top 10 following her win in Indian Wells a fortnight ago – made just 14 unforced errors, while Konta could not convert any of the five break points she created.

“I think I missed a return on one of those break points but otherwise she did an incredible job at being very tough,” said Konta. “Still, I’m very happy with the work I am putting in day in and day out, and I feel like I have a purpose in this game.”

Azarenka was quick to praise Konta’s progress. The 23-year-old would have broken into the Top 20 if she had reached the final in Miami.

"I was very impressed by her improvement and I'm sure we will see a lot more of her,” said Azarenka. “She is definitely playing top-ten level right now. She is in the last eight of an event this big, that's pretty good.”

Now just two matches from the title, Azarenka will have to beat Kerber if she is to keep her hopes of completing the ‘Sunshine Double’ alive. Steffi Graf and Kim Clijsters are the only women to have won both the Indian Wells and Miami titles in the same season.

It will be a third meeting between the pair this year already. Azarenka powered to a 6-3 6-1 win in the final in Brisbane, only for Kerber to win the one that really mattered – beating the two-time champion in the Australian Open quarter-finals as she went on to lift her maiden Grand Slam title in Melbourne.

"Right now I'm looking forward to the semifinal,” said Azarenka, who has won six of their seven previous meetings. “If I can make it, it's great. Right now it seems so close but I want to stay in the present and continue to fight and keep getting better."