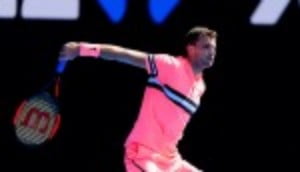 In 3 hours 59 minutes, Kyle Edmund notched a five set victory against 11th seed Kevin Anderson 67 (4) 63 36 63 64 on Court 3. Edmund’s biggest win of his career sees him advance to the second round where he will play Denis Istomin.

“I took chances basically, and they paid off.’ Edmund said. “Really calculated risks, I'd say. It was good. Especially in the fifth set, going down a break, then breaking him twice in a set to win it is pleasing.

“It's really tough to play her,” said Bencic. “You really have to be on the limit of your game. You have to come out with everything you have. I tried to do that today.”

Venus said: “I think she played well. I don't think I played a bad match. She just played above and beyond. I just have to give her credit for that.”

Jelena Ostapenko came through her first round match against Francesca Schaivone and was asked about the postage stamp that was made in her honour after she won the French Open last year.

“Not many athletes in Latvia get a stamp,” she said. “When they told me, I was very, very happy, because I think it's a big thing if they make a stamp. Especially they made 55,000 stamps and they were sold out on the first day.”

Many of the manufacturers launched their Australian Open kits today. Pink seems to be the colour of the season for the men. Nike in particular have decked out their players in bright pink as worn by Kyle Edmund and Denis Shapovalov. World No 3 Grigor Dimitrov had his own outfit, which had stripes across the chest, bearing more then a passing resembling a licorice allsort.

Denis Shapovalov won the battle of the next Gen players, defeating Stefanos Tsitsipas 61 63 76 (5) in just under two hours.

The young Canadian, making his debut at the Australian Open, also won a small battle with a banana, which he found extremely difficult to open mid-match

35-year-old David Ferrer, playing in his sixteenth Australian Open against Andrey Rublev lost in five sets in a match that lasted three hours and fifty minutes. This is the first time the Spaniard has not advanced beyond the first round in Melbourne since 2003.

48 419 people attended Monday’s day session. This was higher that in 2017. Melbourne Park is currently undergoing a major transformation, including a new media centre, housed in a building called “Tennis HQ”.

For more stunning images from the Australian Open, check out our Instagram page.