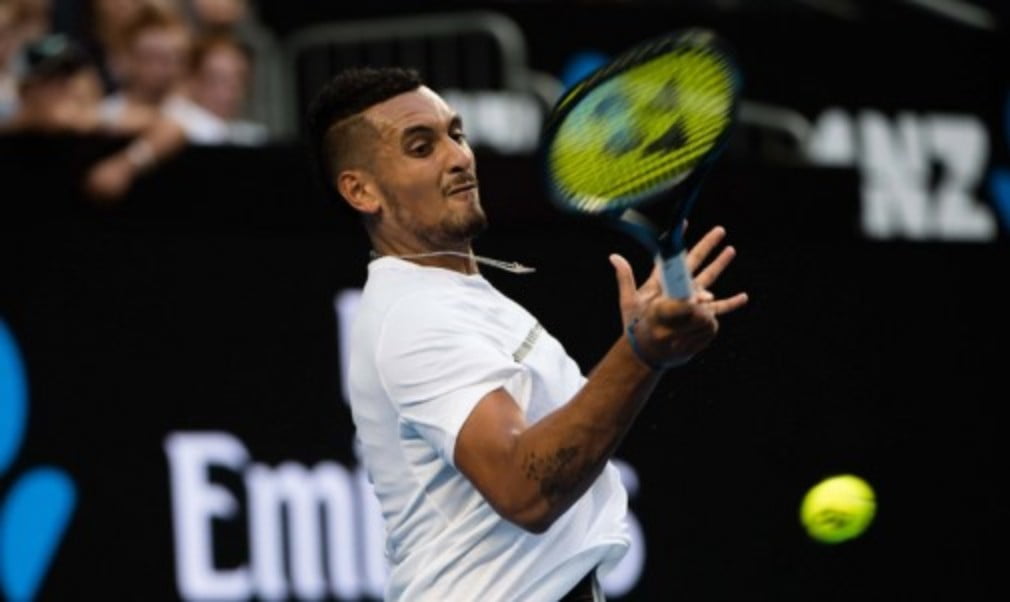 Evo stuns Cilic
World No.1 Murray eased through his second round encounter against Andrey Rublev for the loss of only five games, but Dan Evans was the British name on everyone's lips in Melbourne after he dumped out former US Open champion Marin Cilic in four sets.

Kyrgios crumbles
Nick Kyrgios looked to be heading for a routine win against Andreas Seppi when he cruised through the first set 6-1 and won the second on a tiebreak, but after a scintillating final set on Hisense Arena, the Australian No.1 crashed out with a 1-6 6-7(1) 6-4 6-2 10-8 defeat. Seppi, who famously knocked out Roger Federer in the third round in 2015, saved match point with a stunning forehand down the line before Kyrgios double faulted on break point in the next game. Seppi had already served for the match at 6-5, but this time he made no mistake as the world No.89 clinched victory with an ace after three hours and nine minutes.

Racket donation
Coco Vandeweghe took out her frustration on her racket late in the second set. After kindly donating the crumpled racket to a spectator, the American regained her focus to beat Pauline Parmentier 6-4 7-6(5).

Barty's comeback party
Fortunately there was something to smile about for home fans at Melbourne Park on Wednesday. Ashleigh Barty, still only 20 years old, is in her second tennis career after turning her back on the sport in 2014 and playing professional cricket. The Australian wildcard reached the third round with a convincing 7-5 6-1 victory over American Shelby Rogers, making just 11 unforced errors.

"I had goosebumps on the court," said the world No.223. "Regardless of the result today, I would have been very happy. Now everything for me is a bonus."

“I was making a lot of mistakes like in the important moments,” she said. “But at the end, I'm happy that I won the match. It was not so easy. The conditions were, also a bit difficult today."

She next plays Kristyna Pliskova, who defeated No. 27 seed Irina Camelia Begu. “I never played her, but she’s World No.1 so I guess she’s good," joked Pliskova, "but we’ll see on Friday.” Pliskova said she will consult her twin sister, Karolina, about her next opponent – the world No.5 lost to Kerber in the US Open final but beat the German in the Cincinnati final in August.

Another day out of the office
Making her 73rd appearance at a Grand Slam, Venus Williams beat Stefanie Voegele 6-3 6-2 on Rod Laver Arena. Asked what she would be doing if she weren’t playing tennis, the former world No.1 replied: “I would definitely be in the office. So this has saved me from that. I like to be outside. I'm still making the transition of being indoors a lot. It's hard on me.”

Williams has withdrawn from the doubles, which she was scheduled to play with sister Serena, citing the injury to the elbow that kept her out of Auckland two weeks ago. The 36-year-old will play Duan Ying-Ying in the third round.

THAT third round match
Tomas Berdych will play Roger Federer in the third round. “There was this kind of risk in the air before the tournament, with the draw because his ranking is 17," Berdych said. "So somebody had to get him so unfortunately it gets me, so that’s fine I just need to take that challenge.”

“The last time I played third round anywhere in a Slam was Wimbledon in 2008," said Zverev. "It's been a long time. I couldn't believe it.

“I've never actually won a best-of-five match if I haven't won the first two sets. So being down two sets to love is a whole other story, especially against John Isner. Match point down, break down in the fourth.

Were he to beat Malek Jaziri in the third round on Friday, there’s a possible fourth round match up against Andy Murray.