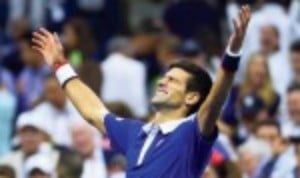 A year to remember: Novak Djokovic

Novak Djokovic. The Serbian took men’s tennis to yet another level during 2015, increasing the rankings gap between himself and his rivals to epic proportions by year-end. Three majors and a record six Masters 1000 titles speak volumes for his consistency on all surfaces and continents.

Some of his more significant numbers during 2015 saw him move to 5th in the all-time weeks at world No.1 standings, and in Paris he became the first player in the Open Era to reach 14 consecutive finals in the same season.

His fitness, intelligent scheduling and effectiveness on hard courts means he now dominates the tail-end of the season in Asia and indoors in Europe; ‘Nole’ has now lost only two matches post-US Open in the last four seasons.

This is an excerpt from "2015: A Year to Remember" in tennishead Volume 6 Issue 6. Subscribe to the magazine today or purchase a gift subscription – just £29 including UK delivery. We'll email you a gift voucher to print off to give to the recipient and deliver the new issue after Christmas.